by Gabrielle Hamilton and Nancy Solomon 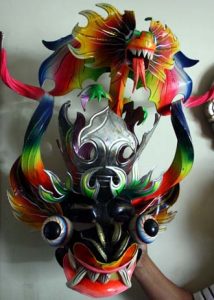 Peter Apaza was born in the city of Puno, in the southern region of Puno, Peru. He brought his traditional music with him to the U.S. and later founded Peru Andino with his sister, Rosa Volida. Peru Andino has an extensive repertoire of 30 dances and an extensive collection of traditional costume dresses.

Growing up in Peru

Peter grew up listening to his father play guitar, quena (wooden flute) and bombo (Andean bass drum). His mother was a singer of traditional Spanish and Quechua tunes. Peter is one of six children, all of whom grew to be artists, all learning at home with family members.

Peter’s father worked as a civil servant for 32 years. He worked at the office in the morning, and when he returned in the evenings, he worked at the family farm. The Apaza family grew potatoes and various grains such as quinoa, and kept animals such as lamb, chicken, ducks, and guinea pigs. The family relied on the farm for meats from llama, alpaca, and pork. Like his brothers and sisters, Peter helped with farming potatoes, quinoa, and more.

Peter remembers that he began playing at six years old. He liked to dance but no one directly taught him to dance. He also taught himself guitar. After house parties, he simply picked up the guitar and other instruments left about the house and began to imitate his father, slowly picking out various tunes. Around the time he was nine or ten years old, his father called together the local kids and created an informal zampoña group, because all the children played a little bit at home. By the time he was 12 and 13 years, he began singing and quickly became known throughout the area as a great singer. When he was 16 years old, he took some basic music classes at the university but he never learned to read music. From the time he was 18 to 28, Peter would sing in Spanish and Quechua at concerts and clubs in Puno, including the Teatro Nacional in Lima. He was later known as the number one singer in the city. He would mostly sing in Spanish because Quechua was not commercially viable. But at the young age of 28, Peter got sick and had to have his adenoids removed, and a bad operation damaged his singing voice.

Since there were a lot of people moving to Lima from that state of Puno, in 1964 Peter’s father founded Los Brizas de Titicaca in Lima. Los Brizas, began as a club offering dance performances from southern Peru by amateur dancers, including his sister Rosa. These dancers did not rehearse, since they were performing the traditional dances that they danced at home in Puno. Peter was the director of Los Brizas in 1978–79; he was also singing and playing guitar there, too.

In 1982, Peter completed university and since he didn’t have a job opportunity to work as an engineer, he returned to Puno to teach in the high school, where he taught music and dance for three years. In 1984, his students placed first at a national dance competition in Lima. Peter saw this as an opportunity to get a visa to travel out of Peru. He went to the embassy in Lima and showed them his award and they granted him a visa.

Moving to the United States

Peter was interested in moving to the U.S. in order to advance economically. “In Peru, the professional situation was bad” for everyone; no matter if you were professional or not, a person could not advance. “The rich person is a rich person for all time. The poor person is poor person for all time.” While his parents agreed with his idea of coming to the U.S., his mother worried since she had no idea what life in the U.S. was like. She had no exposure in Puno as there was no radio or TV. His mother had just a basic education, learning only to read. While Peter’s father had only a second grade education, he read everything [and educated himself] and was a mayor in Puno.

Peter’s sister Rosa moved to Westbury, New York, c. 1981 When he first moved onto Long Island there were hardly any Spanish speakers; most people were either Italian or Irish.

He held a number of different jobs—at restaurants, hotels, factories, often working two or three jobs, seven days a week. He felt it wasn’t easy in New York—there are so many services you have to pay for. He settled into a job with benefits as a window washer for Universal for five to six years and later at Konica Lens until their plant closed. In 2006, he got his nursing-assistant certificate and has been working at the nursing home at St. Francis Hospital and also with private patients.

Peter always dreamed about having his own group in Peru, but it was not possible. In 1990, Peter approached the pastor of a Glen Cove church and asked if he and his sister could perform. Rosa and Peter danced the marinera Puneña. The performance was a great success, and the audience all congratulated them.

Afterwards, other people who lived nearby approached Peter and Rosa, and they formed a small group of eight members. They practiced on Fridays and Saturdays, outside at local parks and at St. Patrick’s parking lot. Their first performance was for Peruvian Independence Day in July 1990. They used a recording to perform the marinera Puneña. Later, they got together a little band to perform with. Today the group includes 30 people, ages 14 to 45 years of age. They perform in churches, cultural institutions, schools, and parades in Glen Cove, Brentwood, and other places. Most of the group members are Peruvians or Peruvian Americans, and one or two are Americans.

Their repertoire includes 30 different dances, and they frequently perform six or seven of them at an event. Dances include: marinera Puneña, diablada, morenada, tuntuna, tobas, cullada, saya, llamarada, negrillos, turkuy, and carnival de Arequipa. Each year, Peru Andino produces four shows, usually in Glen Cove, Westbury, Long Beach, and Brentwood, renting the hall and creating their own publicity. With the money they raise at the show, they often buy new costume dresses. It took years to build up their collection of costume dresses. Rosa is the group’s seamstress, creating half of the costumes they wear. Rosa learned dressmaking in Puno in school. Peter also does some sewing. They buy their supplies in Manhattan, and typically one costume will take one week, with Rosa working on the dress on-and-off for three or four days.

Maintaining the group and beyond…

Peter tries to remain flexible with his dancers, as it is not easy for Peru Andino to keep 30 dancers in the group. Just getting one or two people together is difficult, but trying to coordinate 30 people is a real challenge. People have busy work schedules, and some dancers have trouble getting out to Glen Cove. In some cases, Peter has to pick up dancers for rehearsal from as far away as Queens and then drop them off because the dancers don’t have cars and there is little public transportation out to Glen Cove. There are six core dancers that have stayed with Peter for more than 10 years. But Peter says, “that’s my passion” and “now we transfer [it] to other people”.