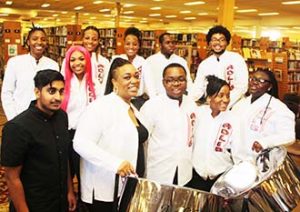 Trinidadian steelband music is a form of traditional music that is rarely recognized on Long Island. Since the early 1970s, Trinidadians have lived on Long Island, primarily in Freeport, Hempstead, Glen Cove, and other villages with substantial minority groups. Working in shipping industries, manufacturing plants, and health-care facilities, the Trinidadian community has not been visible to most Long Island residents. Population estimates of this small community are between one and three thousand, with many having strong relationship and family ties to Brooklyn, whose Trinidadian community dates back to the 1950s.

Trinidadian steelbands have been in existence since the late 1930s, when Trinidadians turned metal containers and other forms of metallic objects such as paint cans and scrapers into musical instruments. By the 1950s, oil barrels were used exclusively for pans. The steelbands performed during Carnival, and on other religious and secular occasions. The steelbands eventually replaced the bamboo drum bands that were common during earlier periods. Calypsos, American popular music tunes from radio broadcasts and movies, and European classical melodies formed the traditional repertoire of the bands and their players. The pannists or people who play in steel bands learned these melodies completely by ear, and learned to play through rigorous repetition. Pannists were predominantly working class and unemployed youth. During the 1940’s and 50’s, steelbands became a symbol of community pride and identity.

The main instruments for traditional steelband includes lead pans, double tenors, double seconds, guitar pans, cello pans and bass pans. The pans are similar to the parts of a choir or a symphony. An “engine room” is composed of a traditional drum set, toomba or conga-like drums, timbales, chac-chacs or scrapers, and irons or triangles. Band sizes can range from under 10 people to over a hundred people. Today’s members can range in age from 5 to 65, with a typical member being in their late teens to late 30s. On Long Island, most members are in working class professions such as welding, trucking, or grounds maintenance occupations. While some women participate, the general responsibility and direction is established by men.

As arranger Lloyd Modeste recalled, “It’s a memory thing. In Trinidad there were no music sheets. I have it all in my head. Around here, they learn the pan like any other instrument [with music sheets]. As an arranger, it’s up to you to put your feelings and your ideas into that song. Arranging for a steelband is more like arranging for a symphony because you have so many pans. All the different pans represent different instruments in a symphony. You have a whole variety of pans, and they all represent some kind of instrument.”

The Adlib Steelband, formed in Freeport in 1987, consists of children and adults of Trinidadian background, where steelbands originally formed. Led by Trinidadian born Jean and Franklin Mayers, this community-based group teaches people the traditional melodies of Trinidadian steelband music including calypso, show tunes from movies and plays, as well as popular songs. Students learn to play the steelband through traditional methods, without sheet music, relying on their ears to learn these complex melodies. They work with arrangers and tuners. In 1996 the group incorporated as the Adlib Steel Band Youth and Cultural Center, establishing an after-school and weekend program. They have performed at area concerts and festivals. To learn more about Adlib visit their website.