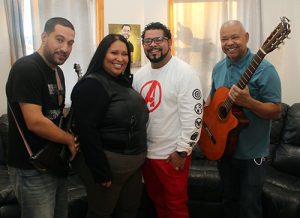 Luis Cordero is from Tenares, a rural town in the Dominican Republic. Luis learned to play the guitar from friends and family members, while he worked at the family farm. His mother recalled that when Luis was just 4 years old he would sing to anybody that came to visit. In 1973, Luis and his family moved to Santo Domingo, where he formed his first band playing merengue, bachata and boleros. Merengue is a traditional type of dance music accompanied by the tambora and güira. Bachata is a style of romantic guitar music.

In 1978 Luis left the Dominican Republic for the United States, settling in Freeport. Luis formed “Los Alegres Dominicanos” playing at local clubs and restaurants. Luis supported himself by working as a dishwasher. Within a few years he was working as a cook. In 1987 Luis Cordero y La Orquesta Dominicana recorded their first album. Since then he has recorded several tapes and CDs. Their music has achieved some popularity as more Latinos settle in the area. Luis composes all of the songs they play, writing lyrics of romance, struggles and of his home. In 2022 Luis Cordero was awarded an apprenticeship grant from the NY State Council on the Arts in recognition of his commitment to preserving the traditions of the Dominican Republic.