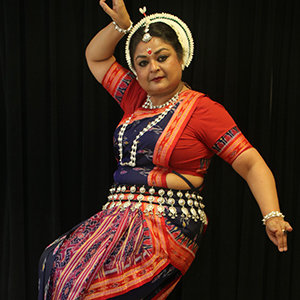 Mala Desai is a master teacher and practitioner of the Odissi form of Indian Dance. Born in New Delhi, she spent a significant portion of her life there, but her family traveled a lot because her father worked for the Indian railway. Mala, like other young Indian girls, started dancing at the age of three or four in the “Kathak” style, a common form found in the region of Banaras. Her mother also sang. “The first dance I learned was the prayer to Lord Ganesh.”

When she moved to New Delhi in 1970, “Bharatanatyam was the classical Indian dance that was most known. I got a teacher by joining a school. For four or five years, we learned Bharatanatyam. In 1977, I became aware of Odissi in Delhi. I went for the first class at the Jagannath Temple just to experience what it is and that was it.” Studying under guru Mayadhar Raut, “I danced every year. Not only with the student performances, but whenever we would get an opportunity we would dance. We often performed when professional artists were dancing.” In her undergraduate study of honors Psychology, Mala did her research thesis on personality and social aspects of creative artists and decided to pursue a career, rather than become a professional dancer owing to the high demands it places on artists and practitioners. She pursued instead social work as her career, a brave move for many Indian women during the 1980s. However, she continued to pursue her personal passion for learning Odissi dance.

Her first public performance was at Queens Borough Hall in 1993, and after that, she began teaching students in her home. In 1997, while pursuing a professional career in social work, she also registered the first School of Odissi Dance in New York, continuing to perform and teach. In 2005, Mala joined the dance faculty at the Young Indian Culture Group to teach at their weekend school in Herricks, New York. Since 2003, Mala has presented many students in a “Manch Pravesh” graduation in Odissi, in which a soloist dances her repertoire.

Mala earned her Diploma in Odissi Dance from the Guru Mayadhar Raut School of Odissi Dance and continues to perfect the art. She was awarded certificates for Classical Dance from the Indira Kala Sangit Vishwavidyalaya, Khairagarh University in India. Mala has performed professionally since 1982, taught since 1994, choreographed student and professional productions since 2008. She was the lead dancer in many compositions presented by Guru Mayadhar Raut and Jayantika, including Geet-Govind, Meghdoot, and Shakuntala. She has also performed in creative semi-classical and modern dance compositions, receiving the New York Foundation for the Arts (NYFA) scholarship for immigrant and traditional artists. Most recently, Mala was selected to serve as an Art Producer for the Artist Commission Project at Queens Council on the Arts.

For more information and for those interested in studying with her, please visit sites.google.com/site/malasodissi

Read a review of one of Mala Desai’s productions: stagebuddy.com/dance/dance-review/review-jump-dancewagon-festival-2016