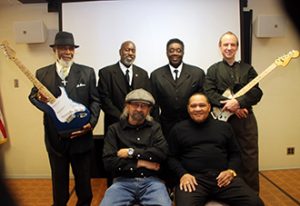 Long Island has one of the most complex music traditions: African American gospel music. The roots stem from the many regional denominations of African American churches. According to African American historian Linda Day, the A.M.E. Zion church was founded in New York by free blacks and has a strong presence on Long Island where free black communities were established in the late 1700s. As a result of southern black migration during 1920–1960 to the north, there are also several Baptist churches on the island.

African Americans left the south in large numbers because of the economic opportunities available in the north, and the oppression of “Jim Crow” laws in the South which legalized segregation and discrimination. During the 1920s there were numerous lynchings and widespread violence towards African Americans. In addition public schools were inferior to white schools, with no transportation to poor or rural residents. In contrast the north provided economic and educational opportunities to all residents, along with jobs in factories and other businesses.

While there are distinct religious congregations, the music styles can overlap from one congregation to another. “Call and response” styles are common in many churches, although there are variations in musical style and rhythm. Most groups have a soloist, male or female, who has a strong voice. The soloist and arranger are generally regarded with higher artistic authority by group members. Acapella is singing without musical instruments of any kind, a style of singing common in “jubilee” music, which reflects the Bible’s teachings. During the times of Southern slavery, the lyrics contained code words which slaves used to carry messages from one farm to the next.

Gospel singing serves important religious and spiritual functions in Long Island’s African American communities. As members of one of the region’s largest minority groups, African Americans use gospel singing as a unifying and emotional force, seeking salvation and redemption on earth and a better afterlife found in heaven. From a social perspective, gospel music brings families who live in different communities together. Singing also takes place at birthdays, weddings, and other family celebrations.

The Elder Statesmen are a traditional gospel group consisting of several African American gentlemen whose families emigrated from the South during the Great Migration. On average, the members are over 60 and their name “characterizes who they are collectively.” The group consists of Teddy Williams, Douglas Covington, Fred Brinson, Keith Oliver, Tony Santodonato, and Arthur Johnson. They sing a variety of musical formats, including hymns and spirituals, gospel and jubilee, a capella and with instruments. Ted Williams is the longest member of the group, and a composer of many of the songs they sing.

The Elder Statesmen have performed in numerous churches, folk festivals, gospel competitions and at local events. The music teaches about the cultural legacy of African Americans, and the historical role of gospel music. Their program includes explorations of the musicians’ family histories and how African American culture is reflected in gospel performance.

Teddy Williams was born in Clarks Hill, SC. Although he believed he might spend his entire life there, he came to NY in 1958. His parents were farmers, and many of the workers sang as they toiled. His mother was considered a great singer. Teddy’s older brothers had a musical group and together sang gospel music in churches. As a young man and teenager he sang in various choirs. At the age of 18, he came to NY to “make money” and play baseball. Teddy admits that “things didn’t turn out the way I planned.” He has worked in a variety of occupations including auto mechanic, in the construction industry, and other “hands-on” jobs. Along with the rest of the group, he credits religion and faith as the guiding light in his life.

Douglas Covington came to the group because of his musical association with Teddy Williams. They sang together in an earlier group and continue to feel comfortable crooning together. Douglas was born in Brooklyn but his family was from Utahville, SC. He started singing in “a small storefront church. There’s always been music in my house. On Saturday mornings – mom played old 45s and grandmother played old 78s and we would just listen to music all day while doing chores.” His mother, Vera Covington, sang in choirs as a child. As a youth he sang in the Brooklyn Borough-wide chorus made up from junior high schools. He continued to sing with his high school chorus and school productions. In college he played with the York College jazz ensemble, and various rhythm and blues bands. Later he did studio work with various gospel artists and played in a rock band. Doug continues to work with these popular and traditional music forms.

Keith Oliver reflects that: “Church has always been a big part of my life. My mother was president of choir, my grandmother sang in a choir, and my brother was very well known in church because he was the organist. There are three types of music in my life: country from father, my mother gospel, and my brother was classical. I love the Southern gospel sound. Grew up to listening to traditional gospel. When I met Ted, we got into a conversation and I ended up in the group. This happened while I was waiting in a post office line talking about music. I said I always wanted to sing in a group, and Ted said well I have a group!”

Arthur Johnson is a resident of Brooklyn with a long history of gospel music as well. “I’ve been Involved with gospel music since childhood.” Like other members of the group, Arthur was influenced by his father. “My father used to be in a quartet and used to teach my mother, sisters, myself how to sing. He knew note for note. Used to be with the Broken All Stars back in the days. When I was 12-years-old, I was playing bass lead for the quartet. After that I went on organ went to lead guitar.”

Fred Brinson is one of the group’s main singers, one of many in his family. “One of my cousins was a bass singer for The Vikings. I heard gospel quartets since I was 6. I’ve been singing all my life. I am the new kid on the block. I’ve heard a lot of the old stuff which I love. But I also love the new stuff.”

Tony Santodanato is also new to the Elder Statesmen. Born in Port Washington, he gravitates to Baptist music, unlike the traditional songs he heard in Catholic churches growing up. “I think music has a large part in bringing the youth to the churches. I was raised Catholic and church was terribly boring. I had no reason to go even though I believed. Coming to Baptist church which is full of music and joy, it’s a different experience, and music is a big part of that. Music took me off the streets when my friends were doing things they weren’t supposed to do. It kept me safe.”