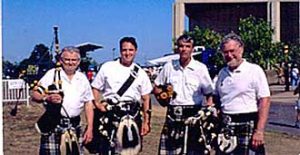 The Clan Gordon Highlanders Pipe Band was founded in 1971 by Andrew McDicken, Jim Summerville, Bobby Benton and eight other members of the Clan Gordon. According to McDicken, “The band actually started when these two men (Jim and Bobby) were having a drink and saying “why don’t we start a pipe band?” None of them had any clue what a pipe band was, they couldn’t drum or pipe or do anything. So they put an ad in the papers and got a couple of Irishmen from Locust Valley who joined and then one week later I showed up and we’ve been making music ever since.”

The group’s beginnings were modest. “Basically we performed for anyone who wanted to listen to us.” Their first performance was at the Locust Valley Memorial Day Parade in 1971. Today they play at parades, concerts, weddings and other festive occasions. The pipers also perform at the Long Island Scottish Games, a traditional celebration that began in 1950. They also perform at “Burn’s Suppers” a traditional gathering that honors the famous Scottish poet and songwriter Robert Burns, the author of Auld Lang Syne. Many of the band’s members are also active in Clan MacDuff, originally formed in 1891. “The clan system was formed by Scotsmen arriving in America. They wanted a social club where they could meet other Scotsmen,” says McDicken. At one time there were five clans on Long Island.

The band’s members range from 12 to 76 years old. The most important criteria for joining is constant dedication to the music. Bruce Mackay of Merrick, a member since 1990, learned to play the pipes as an adult from McDicken. His first position was playing the drum: “The bass drum maintains the rhythm and the step of the band. It’s one aspect that looks simple, but it’s a very hard thing to learn.” After his first few years, Bruce “graduated” to piper. Looking back, he comments “Once you learn the scale, you have to learn all the intricate fingering. It’s really difficult; you know what your fingers have to do but often your fingers won’t do what your brain is saying.” Pipers have to learn how to breathe so that they can power the “drones.” The Scottish or Highland bagpipe is comprised of three drones (two tenor and one bass) which provides the background “hum” sound. The tune is played on the chanter. The sound is produced by reeds in each component from air supplied by blowing into the “bag.” Steady pressure is applied to the bag with the arm. Traditional Scottish melodies include “Scotland the Brave,” “The Green Hills of Tyrol,” “Meeting of the Waters” and “The Battle Is Over.”

Playing is an important experience for all pipers. According to McDicken: “It’s a family and group effort to play well. It gives you a tremendous surge of pride that I don’t think you can get from any other instrument. To play the bagpipes you dress up in a three hundred year-old uniform which creates an attitude within your own self. It gives you an historic feeling. That keeps you going.”

In order to preserve the music for the next generation, Andrew has several students that he tutors every week, along with fellow band member Harold Burnam. “The young people are the crux of the whole band.” If you are interested in preserving this tradition by joining the pipers, click here.