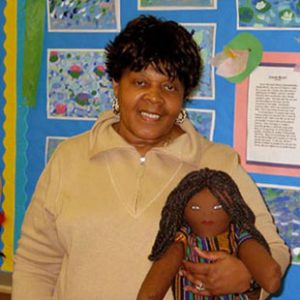 Joan Hodges was born in the Brownsville section of Brooklyn in the early 1940s and is the daughter of Roberta and John Hodges, descendants of southern slaves. Both of Joan’s parents came to New York during the “The Great Black Migration” to seek a better quality of life.

Joan describes herself as a fiber artist drawing on techniques and skills with cloth to create dolls, quilts and other items, such as handbags, hats and flowers. She first started making dolls and dollhouses as a young child, cutting patterns from newspaper and then coloring them with shoe polish. Today Joan creates dolls with an Afro-centric approach using fabric with bold designs and color as well as the more subdued mud cloth. These dolls represent both her African-American heritage and family traditions. For example, one of Joan’s dolls named Joanna, with graying dreadlocks and dressed in a boldly striped tunic represents the griot or the one who is keeper of the history. In addition Joan has been quilting for a number of years, having been taught by Hempstead native Ora Kirkland. Currently Joan is exploring the various quilt patterns used during the time of the Underground Railroad.

Joan has witnessed many disharmonious events in her life. For example, she remembers the difficulty black families had in securing better housing in the 50s, and that certain neighborhoods were controlled by different minority groups. At age 12, Joan’s introduction to racial segregation occurred during a family trip to Virginia. The Hodges had to go to the “colored” section on a ferry. Furthermore, on this southern trip she was introduced to her older sister. This daughter had been raised by her maternal grandmother with no formal education and had a difficult life as a poor sharecropper experiencing racial prejudice. Joan felt she led a privileged life compared to that of her sister, who lived in a small, unpainted cabin with no running water.

As the civil rights movement gained more momentum in the 1960s, Joan and her family moved to Lakeview, Long Island, buying a house. She also enrolled in the Fashion Institute of Technology in Manhattan, in 1968. Although some parts of Long Island were open to equal opportunity for all, Joan once again saw racial feelings emerge as protests erupted to keep blacks out of Malverne schools and to deny busing for minority students. She was there in 1965 at a rally in Lakeview, Long Island, in which Martin Luther King showed his support of school integration. “We have come a long way,” she recently said. “Things have gotten better, but we still have a long, long way to go.”

Today, Joan’s works are exhibited at museums, and community centers. She is also a presenter at area schools, including Freeport. Through both her craft and her life experiences, students investigate the ideas of sharecropping, migration, segregation and integration. Joan makes the Civil Rights movement come alive as she tells stories of her personal experiences and shares selected songs of the time. Joan is also a member of Sisters of Heritage, a group of artists who share their art and history with people in the community.