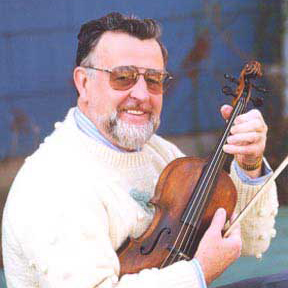 The Irish community on Long Island is one of the largest ethnic groups in the region. Since the late 1800s there have been Irish laborers, farmers and other tradespeople who have called Long Island home. By the early 1920s there was a sizable Irish community with churches, dance halls, social clubs and aid societies. In recent years there has been a tremendous surge in popularity of Irish traditional music and stepdancing. Productions like Riverdance have attracted children and teenagers to traditional art forms. As a result fiddler master Pete Kelly is in high demand.

Pete Kelly was born in Ballymoe, Ireland, the home of Father Flannagan and Irish revolutionary leaders. The youngest of 12 children, Pete was born in 1936. Pete grew up on a farm, attending school two miles away until the age of 14. After returning home he worked in the fields and the dairy barn, harvesting potatoes, oats, wheat, barley and vegetables. “Almost everybody sang or whistled a tune. From your cradle days you listened to hornpipes, jigs and reels. My father would be singing while he was working. It became like a second language to you.” During the long winter nights “Those who had an instrument would gather. And people would sing and dance. The next night you would go to the neighbor’s house.”

Pete’s first teacher was Leo Byrne, who taught at the school every Saturday and performed with showbands during the weekend. At the same time the radio stations began playing American music. “By the time I was a teenager I wasn’t playing just Irish music, I was also playing American music.” In 1953 Pete moved to England to study classical music at the Manchester Northern School of Music, working in a foundry and singing in a local choir. “I went no place without my fiddle.” He stayed there until 1957 when he returned to Ireland to play with the Ivy Castle danceband. He was paid approximately $2 for each concert through donations. Pete returned to England for a short time, where he worked for the Royal Palais Orchestra. When he received his draft notice in 1959, he decided to leave England and shortly afterwards moved to New York City. Pete enlisted in the Army for two years in 1960. Upon his discharge he worked at Chase Manhattan as a bookkeeper.

In 1962 Pete moved to the Bronx, where he started a band that played in local clubs. A short time afterwards Mr. Keough asked him if he could teach his two sons to play the fiddle. “Other people started to call, and within a couple of months I had so many students. It just grew and grew and grew. I gave up the job at Chase Manhattan. I’ve been at it every since.” By 1970 Pete had taught hundreds of children and teenagers to play the fiddle, enough to form a traditional Irish fiddle group. The Shannonaires made seven tours of Ireland and recorded an album. At the same time Pete was teaching in Brooklyn, Queens, the Bronx, New Jersey and even Detroit. “Looking back on it I really don’t know how I did it.” Pete teaches mostly individuals today, performing with his long-time friends Pat Murray, Brendan Fahey, Martin Mulhaire and Hugh O’Neil. Reflecting on his life, Pete states “My mission and purpose was to reach out and touch all these people. That’s the greatest reward – to know that I have touched so many lives.” Pete sadly passed away in February 2020. We shall remember him with great joy.