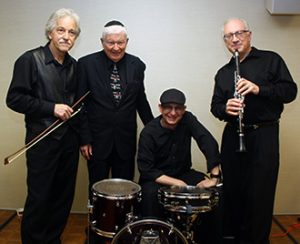 KENAHORA is composed of four musicians who have been preeminent in the world of klezmer music, bringing their unique brand of music to audiences far and wide. With collectively over 150 years of performing to their credit, the members of Kenahora are truly all-stars and mentors to both musicians and audiences alike.

Ken Maltz, clarinet and leader, has enjoyed a career of remarkable accomplishment, diversity, and depth. As a founding member of Kapelye, the pioneering klezmer band, he has performed in hundreds of appearances on stage, television, radio, and film throughout North America, Central America, and Europe and is known throughout the world as a leading figure in the klezmer revival. Such diverse sources as The New York Times, The Times of London, and The Berlin Morning Post have spoken of his performances in the most glowing terms. He has appeared in the feature films Over The Brooklyn Bridge and The Chosen, for which he received additional credits as musical arranger. Ken has performed with such greats as Itzhak Perlman, Fyvush Finkel, and Cantors Joseph Malovany, Ben Zion Miller, Moshe Koussevitsky, Robert Abelson, and Alberto Mizrachi. In addition to his career as a performer, he has composed musical scores and sound effects for Bantam Doubleday Dell audio books including the popular Star Wars series, which features his music alongside that of Oscar-winning composer John Williams. He is a member of the American Society of Composers Authors and Publishers (ASCAP) and the American Federation of Musicians, Past President of Local 1665 of the American Federation of Teachers, and serves on the Board of Directors of Long Island Traditions.

Pianist-vocalist Peter Sokolow has been performing since 1956. His repertoire of songs numbers in the thousands and includes material from various genres, including American standards by the great composers of the past: Berlin, Kern, the Gershwins, Jolson, Crosby, Sinatra, et al. Yiddish, klezmer, Israeli, Irish, Italian, Viennese, jazz, and much, much more. Mr. Sokolow has appeared in concert venues throughout the United States, Canada, and Europe and has worked with many noted performers such as Itzhak Perlman, Shlomo Carlebach, Theodore Bikel, Fyvush Finkel, Dave Tarras, and The Epstein Brothers. He is featured in films (The Chosen), documentaries (A Tickle in the Heart, Fiddler on the Roof) and can be heard on over 30 recordings.

Bassist Marty Confurius is a veteran of the New York recording and jazz scene, touring with the Central Park Sheiks and performing with Andy Statman, The Klezmer Mountain Boys, The Klezmatics, Kapelye, The Yiddish Radio Project, Jorma Kaukonen, and Alicia Svigals. Recent recordings include Shifting Sand of Time with Tim O’Brian, Tony Trishcka’s Double Banjo Bluegrass Spectacular with Steve Martin (nominated for a Grammy in 2008), Loreen Peer’s Lost Balloons, George Mann’s Patience in These Times, Three of a Kind by jazz trio Urbnergy, and many others. Marty currently teaches and freelances in the New York City area.

Larry Eagle, drums and percussion, keeps his musical portfolio diversified. He is a founding member of Bruce Springsteen’s Sessions band, which won a Grammy for Traditional Folk Music and appeared on R&B/Soul artist John Legend’s Grammy-winning second album. He can be heard on Grammy-nominated albums from Odetta to Andy Statman, and has recorded with Ricky Skaggs and jazz/soul singer Lizz Wright. Other shows on which Larry has performed include The Tonight Show, Late Night with Conan O’Brien, Good Morning America, and the PBS and BBC networks. Not to be confined to land, Mr. Eagle has also entertained audiences on an ice-breaking Baltic Sea ferry out of Naantali, Finland!