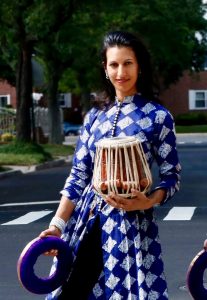 Sejal was born and raised in upstate New York, the daughter of Indian immigrants, where she was surrounded by traditional Indian musical instruments. Over the years, she has grown to become the only female classical tabla soloist in the United States.

Although her family had no musical specialties, she dabbled somewhat with this instrument since junior high school, taking it up seriously during her years in college. It was only after attending an Indian percussion concert in Manhattan that she made a spontaneous but decidedly firm decision to become a devoted student of tabla. She moved to India to start a four-year-long, serious and intense study of the tabla. She trained under guru Pandit Divyang Vakil, one of India’s foremost tabla masters.

During the apprenticeship in India, she completely immersed herself, attending daily lessons, practicing many hours each day, listening to music with other students and tabla players, and attending concerts. In India, Kukadia attended the Rhythm Riders Music Institute, located in Ahmedabad. Here, she was one of very few female students studying to become a professional tabla player. She was also the only American.

Sejal recalls: “Tabla is a difficult instrument. For me, the challenging part was the practice and the discipline. We were required to practice 4-6 hours a day. Once you decided to receive this training, you had to adapt to the lifestyle as well. All of the students were not allowed to have much of a social life. I remember maybe seeing one movie in the theater the entire time I was there. Not visiting relatives and family. But I very much understand why: You don’t want to divert your mindset; and doing other things, whether going out to a movie or a party or something like that, diverts your mind and energy away from the tasks and goals of the musician-in-training. This is a very one-track type of thing. It’s a journey towards a very true, classical, authentic art form. Our teacher wants us to learn in the way that he had learned and the way his teachers had learned. The result of this training is the ability to play beautiful, technically-advanced tabla compositions with speed, dexterity and clarity.”

Learning to play and perform tabla was historically a male-oriented profession, and the art was passed down from generation to generation through certain families of the communities that were genuinely and entirely devoted to one gharana, or specific approach or system of tabla playing. During the olden days in India, it was important that classical musicians strictly adhere to playing compositions of their own gharana. Today however, students are free to learn and experiment with diverse styles of compositions which stem from various different gharanas.

In the past, learning tabla entailed listening to the teacher’s verbal recitation of the composition. After the teacher spoke the composition aloud, the disciple was required to immediately memorize it, as opposed to writing it down on paper. This is because the music was considered a sacred art form and writing it down would make it accessible to others. All notes, phrases and complete compositions had to be grasped, memorized and learned orally.

During the course of her studies, Sejal wrote an in-depth essay about tabla and how it is played, which eventually turned into her book Tabla Taalim: A Study in North Indian Percussion, published by the Taalim School of Indian Music, an institute which she helped to establish upon her return to the USA. The book includes handsome illustrations, musical compositions and a general background to this instrument. With the blessings and guidance of Pandit Divyang Vakil, Kukadia and two other teachers began teaching tabla to Indian and American students in New Jersey. In 2009 Kukadia moved to Long Island, where she continues to offer classes and is an instructor at various schools throughout the area, including the Young Indian Culture Group. Students come from a wide range of backgrounds and take classes on a weekly basis. She also continues to perform in area ensembles and as a soloist.

To learn more about the Taalim School of Indian Music, click here.