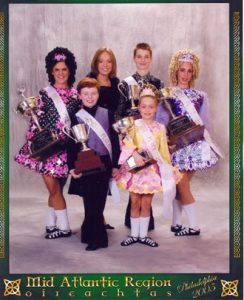 The Irish community on Long Island is one of the largest ethnic groups in the region. Since the late 1800s, when Irish immigrants first came to the United States, there have been Irish laborers, farmers and other tradespeople who have called Long Island home. Although many first made their homes in New York City, by the early 1920s there was a sizable Irish community with their own churches, dance halls, social clubs and aid societies.

In recent years there has been a tremendous surge in popularity of Irish traditional music and stepdancing. Productions like Riverdance have attracted children and teenagers to traditional art forms, swelling the ranks of classes throughout Long Island. Debbie Lynch is a 1st-generation American who learned to stepdance from Jerry Mulvihill, a master Irish stepdance teacher. Debbie is a master stepdancer who has extensive knowledge of traditional stepdancing including its history and techniques. In this program she teaches students about the costumes, dance patterns, and occasions where stepdance is traditionally performed. The students are also taught simple stepdance movements.

For more information about the Mulvihill Lynch School of Irish stepdance click here.