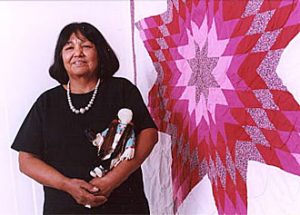 Ina McNeil was born on the Standing Rock Sioux Reservation in South Dakota. She is the great great granddaughter of Chief Sitting Bull, the legendary Hunkpapa Lakota warrior. Her traditional name is Scarlet Whirlwind Woman or Wamni-Umni-Luta-Wi, a name given to Ina by her great grandfather Henry Oscar One Bull. As a teenager she learned to quilt from her mother Annie Broughtplenty, in order to keep warm during the harsh, brutal winters. “Quilts are important because they replaced the buffalo robes our people used to make. That’s what kept them warm. When I was a teenager my mother had me sew some pieces together first by hand and then by machine. She made a lot of quilts. She made Ikjai meaning simple quilts. She was a domestic worker and she didn’t earn enough money to take care of the family. So in the evenings she sewed a lot of quilts. She sold them to other Indian families who did not have enough time to sew. She spent about 3-4 hours every night sewing.”

Typical Native designs include eight-pointed stars or diamonds which represent the daybreak star seen throughout the world, embedded with traditional symbols such as eagles or deer, and “crazy quilts” that use thin strips of fabric. The crazy quilts were made from fabric ends that were leftovers from other sewing projects. “Sometimes we would get together, the women in the family, and we would quilt. You would have four or five women get together as they came and visited, and they would see us quilting and would sit down and join us. We would work on one quilt that was on a frame. My Aunt Grace’s house is still a special place today. We gather there and we sew together and we quilt whenever we can.”

Like other traditional artists Ina makes her quilts to commemorate specific events, such as the death of a loved one or the birth of a child, as birthday gifts, or to recognize significant achievements such as college graduations to friends and family members. Quilting in some ways transports Ina to her earlier years when she would learn the history of her people; “We talked about everything—who was having difficulties and what we could do to help them, as well as joyous occasions—everything was discussed. Also our Aunts talked about the things that our great grandfather, Henry Oscar One Bull, used to teach them about the history of our people. The way they did certain things. Sometimes they discussed these important matters while we were quilting.”

As a young student Ina was required to attend an Indian boarding school operated by the Bureau of Indian Affairs in Pierre, South Dakota. The school was very strict and at times brutal to its young children. Ina recalls that teachers and staff often hit them for sharing food with classmates, for speaking their native language or calling each other by their traditional names. “If they caught you speaking your language or singing your songs they punished you.” Despite these actions Ina has dedicated herself to preserving the culture of her native tribe, the Hunkpapa, part of the Lakota Tribe. At the same time she is fiercely dedicated to educating outsiders, as well as preserving these traditions within her own family.

My grandmother Cecilia One Bull Brown often said “you come from a family of chiefs. You must always remember who you are and that God created you this way. If you forget who you are and you forget to speak your language, the government, one day in the future, will say “are you Native American?” And you will say yes. And they’re going to ask you if you can speak your language and you won’t be able to. And they’ll tell you “you’re not Indian then.” And she would say you must never forget your language or your religion. Those things were taught to us very young.”

Ina has lived on Long Island since 1970 in Hempstead. She raised her family of five children on Long Island, many of whom still live in the area. Ina also has 9 grandchildren. She is closely involved in many Native American cultural institutions. Her work has been exhibited at the National Museum of the American Indian in New York City and has won awards for her Lakota dolls. She is a frequent presenter at area schools including Freeport. Ina spends time at the reservation and in Hempstead. At the reservation she is active in helping children learn about their culture, encouraging them to spend time with their parents so that their culture will continue.