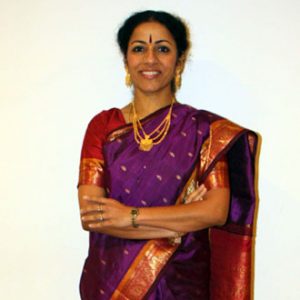 Satya Pradeep is a well-known New York area Classical Indian dancer and choreographer. Her dance forms include Bharatanatyam and Kuchipudi, traditional classical styles which originated from the South Indian States of Tamil Nadu and Andhra Pradesh.

Satya Pradeep was born in the Southern Indian province of Chennai (formerly known as Madras), a region well known for its artistic and cultural heritage. She has been trained in the Bharatanatyam and Kuchipudi dance forms by eminent Gurus, Padmabhushan Kamala Narayan and Smt. R. Rhadha, in the Vazhuvoor style of Bharatanatyam, and Dr. Vempati Chinna Satyam in the Kuchipudi style.

It is with this approach and dedication that she established her dance school, Nritya Saagaram, in 1993, and is actively helping to propagate this dance art form to the community. She has given several solo and group performances, both in the U.S. and in India, and has won numerous accolades.

An ancient traditional art form with its origins steeped in divinity, Bharata Natyam and Kuchipudi reflect the culture of India at its best. The dancer, can be a soloist or performing in a group, accompanied by a minimum of two musicians and usually four for a full-scale concert. The dancer performs and acts out stories about Gods and Goddesses from Indian mythology, folk tales and stories with emotional content. Linear geometrical patterns, a perfect balance of the body, eloquence of expression, and precision of footwork to intricate mathematical rhythms are the hallmarks of these dance forms. Bharatanatyam is one of the oldest Classical Indian Dance forms, originating more than 2500 years ago and comprises of several arts like sculpture, painting, theatre, literature, music, dramaturgy, and poetry.

Beyond the stylistic differences of Kuchipudi and Bharatanatyam steps, there are certain types of dances that are unique to Kuchipudi. Specifically there is the Tarangam of Kuchipudi which is unique in that the dancer must dance upon a brass plate, placing the feet upon the raised edges. The dancer moves the plate with much balance as the individual is traditionally dancing on the plate with a “kundi” (small vessel) containing water on their head. There are also subtle differences in the costumes of both types of dances. Generally, Bharatanatyam dresses have three fans of differing heights that form the illusion of the spreading pleats of a sari (a dress worn primarily by women, consisting of several yards of light material that is draped around the body). However, in Kuchipudi there is typically only one fan which tends to be longer than the longest of the three fans present on Bharatanatyam dresses. Finally, in Bharatanatyam the poses are more sculptureque and in Kuchipudi they are more rounded poses. Bharatanatyam and Kuchipudi share a few common elements including, the half sitting position and the hand gestures.

Satya personally trains her students and has conducted many Arangetrams, or dance debuts. Her teaching follows much in the pattern of the “Guru-Sishyaa” (the teacher and the student) tradition of yore. The students develop a personal relationship with their teacher. She has presented many dance ballets with her students. Satya has the unique talent to bring out the best in all her students, living up to the motto of her dance school — dance is an ocean of learning. Satya Pradeep has conducted many lecture demonstrations and workshops at the Long Island Yoga Association, Long Island High School for the Arts, at Residential Facilities, for the Girl Scouts of Nassau County, and at various Public and Private Schools in the New York area. One of her presentations at an elementary school in Long Island, as part of their multi-cultural celebrations in Long Island, was covered by Channel 7’s Eyewitness News, New York. She uses dance as a medium of expression to raise the cultural awareness within the community. In October, 2006, she was interviewed for the Arts Scene on Long Island, a television program aired on Cablevision, by the Cablevision of Long Island.

Some of Satya Pradeep’s noteworthy performances with her students, include a presentation at the United Nations, Town of Hempstead Town Hall, Nassau County Theodore Roosevelt Legislative and Executive Building, Long Island Dance Consortium (group of Long Island-based dance companies), and at the New York City Comptroller’s office. To learn more about her visit her web site.