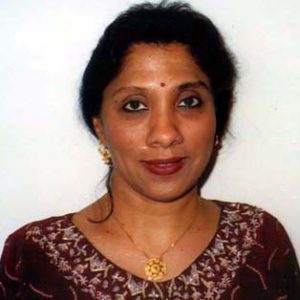 Rathi Raja was born in Ambala, India in the northern state of Haryana to parents from the southern state of Kerala. The family moved frequently since Rathi’s father was in the Air Force, and Rathi grew up fluent in three languages—Tamil, Hindi, and English. The experience of living in so many different parts of India gave her a “bigger perspective” on her country as well as a lifelong interest in its diverse cultural traditions. Although Rathi attended British schools where she read more Milton than Mahabharata, at home she read and reread the great Hindu epics, also listening to her father recount the classic tales.

Rathi came to the United States with her husband Ramani in 1981. With an MBA in Finance and Information Sciences, she worked on Wall Street for several years before relocating to Manhasset, Long Island. She quickly became aware that American-born Hindus like her own children were in danger of losing important cultural and religious knowledge through acculturation, just as many Indians of her generation had done through their British schooling. Rathi began to tell stories from the Mahabharata, Ramayana, and Panchatantra to engage children’s interest in their culture and to teach them to be proud of their traditions:

That, I think, came from my dad. My dad when he talks about his country or his traditions there is so much pride, and I think that pride is transmitted. It’s so important when you teach children about culture, their own culture which is really a minority, that they develop a sense of pride. So more important than technique is actually you, the storyteller, give them the sense of pride. You become the role model for them. They learn from that, and it is a very precious thing to transmit.

Soon Rathi decided to dedicate herself full time to teaching children in Long Island about their religious, cultural, and linguistic heritage. In 1993, she founded the Young Indian Culture Group (YICG) to accomplish that goal, with the help of fellow Long Islanders Drs. Urmila Shivaram and Runi Ratnam. Twenty-five students registered in YICG’s first year; today over 120 children, ages 4 to 18, attend Saturday classes at the Herricks Community Center. The group’s 14 dedicated teachers offer a wide variety of 28-week courses at minimal cost, including Hindi, Tamil, Gujarati, yoga, Indian cooking, Vedic scriptures, Indian history, mehendi (henna body painting), rangoli (mandala painting), folk dance, classical dance and singing. Vedic Heritage students follow a rigorous syllabus based on traditional teaching methods: “There’s a method to the teaching, the reading of the verses from the scripture, and at the end of it they do have an understanding. It’s a very ancient tradition of teaching; there are certain prescribed texts and you follow them.”

Though YICG’s main focus is on education, the group is also dedicated to public outreach. The students put on two shows annually which are open to the public. In addition, Rathi has been a guest teacher in Long Island’s public schools and has developed a collection of materials on Indian culture for the Long Island public library system. She received a Nassau County Community Service Award for her efforts. For more information about Rathi go to her blog.