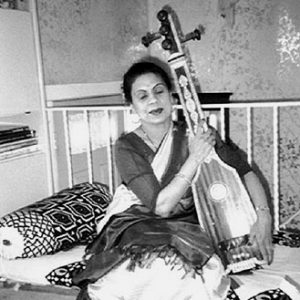 Rohini Ramanathan of Oceanside, NY, is a traditional and trained Indian classical singer, an art she learned from renowned musicians in New Delhi, India, and her own mother, an award-winning and university-trained musician. Coming from a musical family, she began her formal lessons at age eight, and at age thirteen, she began performing on India’s national radio, All India Radio-Delhi as a youth artist. A soprano, Rohini is also well versed in Bollywood and devotional music and sings in many languages, including classical Sanskrit, and Tamil, her native tongue and the world’s oldest language.

After obtaining her English Honors degree from Jesus and Mary College, New Delhi, Rohini moved to the United States when she was 18 years old; obtained her master’s (the University of the District of Columbia; Media and Library Information Sciences) and doctoral (Boston University; educational media and technology) degrees, worked in the fashion, health, banking, IT, and community development venture capital industries; academia; non-profit sector (https://www.linkedin.com/in/dr-rohini-ramanathan-1b6bbb15/) and community organizations for many years even while pursuing her music career. She taught Indian classical music at the New School for Social Research University in Manhattan. As a winner of many awards and grants, she has produced the following feature-length music and literary titles:

Rohini has performed at numerous prestigious venues, both in the U.S. and India, including, working with Western classical and jazz musicians, modern choreographers, and practitioners of Indian classical dance. In 1998, she was honored by the Long Island Traditions, Inc. for her musical contributions both as a performer and teacher.

Her other activities include, being:

As a columnist/essayist/feature and short story writer, her writing has appeared in:

She was one of the writers featured at Kahaani, a new forum launched at Columbia University’s Southern Asian Institute for writers of the shared languages of the Subcontinent. Rohini’s dissertation analyzed the knowledge, and perception of, and attitude toward India and Indians among New York City Public School seniors. At present, she divides her time between consulting, music, and writing. She has been a featured reader multiple times at the Oceanside Kiwanis Club’s Summer Gazebo Reading. Her blogsite address: www.yeahwhatif.blogspot.com