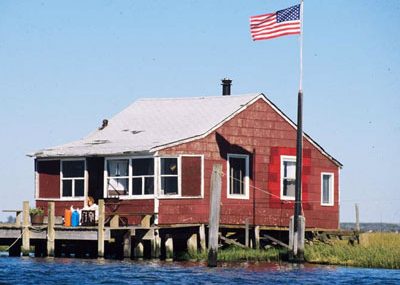 On The Bay is a book on the bay houses within the Town of Hempstead. Written by Nancy Solomon, executive director of Long Island Traditions, the book documents the architecture of these unique structures originally built by baymen, fishermen and duck hunters in the early 19th century for shelter while clamming, fishing, harvesting salt hay or duck hunting. During the early 20th century the houses were used by commercial duck hunters until it was outlawed in 1917, and by rum runners, who smuggled liquor to the nearby shores during Prohibition. In the 1950s and early 1960s recreational fishermen and sportsmen built dozens of the small structure, using the same designs as their predecessors. In 1965 the Town removed most of the bay houses in order to preserve the fragile wetlands.

In 1991 the Town of Hempstead moved to preserve the last remaining bay houses. The 2nd edition of this book, published in 2011, documents the traditions of those who first built the modest houses, and contains historic and contemporary photographs by noted photographer Martha Cooper (www.kodakgirl.com and www.nycitysnaps.com). It also includes a new preface and introduction, along with some updated photographs.

You can order this book online from Long Island Traditions, or purchase it at the Sea Horse Gift Shop located at 165 Woodcleft Ave in Freeport.

The Koelbel family of Baldwin spent many summers at the “shack,” learning how to crab and eel for their meals. Joseph Koelbel’s daughter Mary Carson remembers that there were important lessons that her family eventually learned from the baymen.

In the early days we didn’t know how to keep soft-crabs soft. So when my father came home from jacking in the middle of the night, Mom would get up and fry the soft crabs. She’d wake me, and we’d all have soft-crab sandwiches.

We gradually learned how to shed crabs– how to wrap the soft-crabs in cabbage and keep them on ice for a day or two –until we had enough for a real meal. But to this day, I remember being a sleepy six-year-old tasting the two-o’clock-in-the-morning flavor of soft-crab sandwiches.

Fishermen and sportsmen, like Carmine Marinaccio and Arthur Pearsall, frequently witnessed illicit activities. They kept many of their stories secret until recently, because of fear of retribution.

Jack Combs, a burly bayman, and his partner, “One arm Charlie,” shared a bay house in the Haunts Creek area. The tale he told me: He and his friend had converted their booze into cash and deposited it for safe-keeping in a cigar box and hid it under a cot. By the time they returned the next day, the extra high tide had soaked their “deposit box,” the $5s, $10s and $20s, now soggy with salt water. Jack hastily went to town and returned with a box of thumb tacks. The two had just finished tacking the money on the walls to dry when federal marshals, gun in hand, kicked the door open and, gaping at the money hanging on the wall, shouted “You are under arrest!” Jack stuttered and gasped, “What for?” “Possession of alcoholic beverages” came the answer. “Wa, wa, wa, we only got money; no booze,” Jack protested. “Ain’t against the law to have money.” All the while one arm Charlie nodding in approval.” “You have a point,” admitted the officer. “We will be watching you,” he cautioned as he left.

Docks, decks and walkways were easily transformed into children’s and adult’s playgrounds. The bay also provided numerous opportunities for mischief and play for people of all ages.

When you go down the Horse Race, there’s a big sandbar [in the middle], and if you didn’t know where you were going, you would run aground. We used to have a few characters, and a stranger would go by and would say, “Where’s the channel?” And they (the characters) would say “Right down the middle.” And they’d go, wump, boom and hit the sandbar. We’d crank over the siren, ring the bell and wave at him.