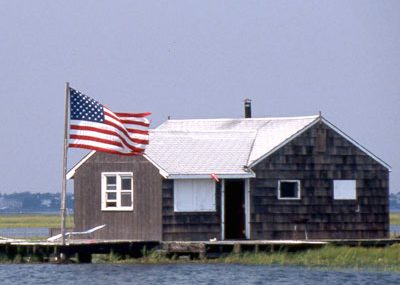 Since 1992, Long Island Traditions has sponsored a bay house tour in Freeport. Bay houses are small shacks that stand on the marshlands that were originally built in the 1700 and 1800s by fishermen, baymen, and duck hunters for shelter while they harvested clams, salt hay or went duck hunting.

Through the years they have been passed down among their families. During the 1940s–1960s, other residents built bay houses as weekend getaways; by 1965, there were over 200 bay houses. In 1965, the Town of Hempstead removed most of the bay houses in an effort to preserve the sensitive wetlands on which they stand. In 2012 Superstorm Sandy destroyed over 20 bay houses, leaving 14 remaining in the Town of Hempstead. Five of these were declared eligible for listing on the National Register of Historic Places. Several bay houses have been rebuilt. As of 2020, there were 30 bay houses standing.

For more information about the tours, check out our Events page or call Long Island Traditions at (516) 767-8803 during office hours or e-mail us at info@longislandtraditions.org. Please note that Long Island Traditions’ members receive priority in reserving for the tours. To become a member, click here. You can also read more about the bay houses by purchasing a copy of On The Bay.

You can also listen to bay house stories by clicking here.