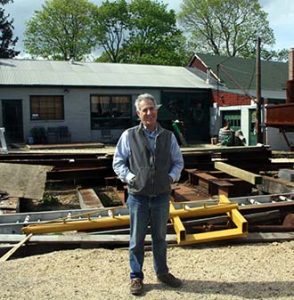 Donn Costanzo is the founder of Wooden Boat Works, where he built and restored traditional recreational sail boats and motor boats. Raised in Sayville, Don first became interested in the skiffs and garveys used on Great South Bay by local baymen. Donn went clamming and scalloping, traditional activities for area residents. As a high school senior, he worked with Al Terry to restore one of the legendary boat builder Gil Smith’s skiffs, launching Donn on his career path. However, “it was not until I went to Lance Lee’s apprentice shop that I learned classical boat building. At that point I felt I had some skill that was marketable.” He later worked in Europe both building and restoring boats before returning to Long Island in 1994.

At first he worked on restoring Beetle Cats, a popular racing boat on Long Island during the 1950s. “We started with one Beetle Cat. Now we have 40.” Shortly afterwards, Wooden Boat Works began restoring Gil Smith boats and building a John Atkins’ designed lapstrake skiff. Eventually he was able to establish Wooden Boat Works at the Hanff boat yard in Greenport, where he could work on larger boats that required deep water. Costanzo works with several people including Ricardo Vincente, Bruce Bentley, along with established builders like Anders Langendal. Donn reflects that, “I never had a customer who wanted new technologies on the boat—the reason customers come to us is because we have a level of appreciation for the aesthetics of yachts and the technical ability to do it as it was done before.” Donn continues to work in Aquebogue.