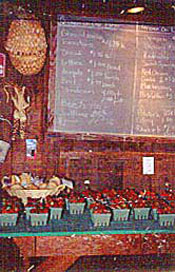 On Hegeman’s Lane in Old Brookville stands Youngs Farm, founded in 1893 by John H. Youngs, the great-grandson of Thomas Youngs who ran an apple orchard in nearby Oyster Bay. The 1893 Youngs Farm, which has been cited as a “Century Farm” grew bibb lettuce, potatoes and sweet corn and raised cows, chickens and pigs. These crops were the main staples of the operation until the 1950s. However, Arthur Youngs, says his son John “was very conscious of new ideas. And I must credit without reservation Cornell Cooperative Extension Service because they have helped us immeasurably.” After World War II supermarkets began to open on Long Island and many residents started shopping in them. “Fortunately there is a segment of the population that has tasted freshness and knows what it is. All of our product is picked fresh the same morning.”

In order to retain their customers the Youngs and other farmers opened farm stands so that residents could buy fresh produce including sweet corn, strawberries, tomatoes and various kinds of lettuce. As John Youngs recalled “around 1960 my two young daughters [Jo-Hanna and Paula] got the idea of selling sweet corn along the highway and it did very well. It finally got through to me ‘why am I hauling all this stuff to the New York market when they come right to my door and buy it?'” A few years later the Youngs farmstand encompassed a large shed that was enlarged and increased. Today the Youngs grow tomatoes, peaches and berries, bake pies and muffins and sell items such as pasta, cheese and other foods. The farm is run by Jo-Hanna Youngs and her sister Paula Youngs Weir.

The Youngs farmlands once included sections of Planting Fields State Park and additional acres in Old Brookville. The family had to sell a portion of their 100-acre farm in 1980, in order to settle an estate. Unlike other farmers from the once thriving agricultural community, they sold their land to Banfi vineyards so that the land would remain in agricultural use. Paula and Jo-Hanna Youngs Gooth are also strong preservationists, as was their father John.

Their commitment to heritage and preservation includes and extends beyond the farm. Jo-Hanna Youngs restored the family homestead, an expensive effort that has made her father proud. “You could have built a new house cheaper but it wouldn’t be good for the heritage here.” In 1995 they restored their barn for both practical needs and to satisfy their late grandfather’s wishes. John Youngs died in 2000. He served as President of the Agricultural Society of Queens, Nassau and Suffolk Counties, as a member of the community’s Zoning Commission and as President of Nassau County’s Cornell Cooperative Extension Service. Jo-Hanna Youngs was secretary of the Agricultural Society of Queens, Nassau and Suffolk Counties and Paula Youngs Weir is active in local historical groups, serving on the boards of Raynham Hall, and Preservation Long Island.