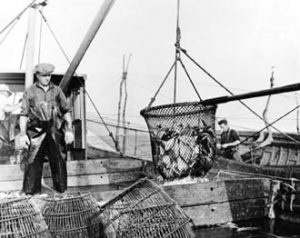 Bob Doxsee, the owner of Doxsee Sea Clam Company, which closed in 2013, carried on the traditions of his family, one of the older families to settle on the south shore of Long Island. The Doxsees began as farmers and fishermen, including James H. Doxsee who was born in Islip in 1825. In 1865, the Doxsees opened the first Long Island clam processing plant in Islip, which ran until c.1900. In 1900, one branch of the Doxsee clan moved to North Carolina, where they continue to make Doxsee can clam juice and clams. Bob’s grandfather John C. Doxsee opened the Deep Sea Fish Company in Islip, setting ocean pound traps off Fire Island. In 1919, Bob Doxsee Sr., who later became the mayor of Freeport, moved the family operations to Meadow Island near Point Lookout, where the Doxsees and their workers lived in bay houses. In 1933, the company moved to Point Lookout, where it remained until 2013.

The Bright Eye Fish Company, as the company was known then, continued the tradition of setting ocean pound traps, where they caught and sold flounder, fluke and many other local species of fish. The company was so named because fresh fish have bright eyes. At the same time Bob Doxsee preserves his family history through photographs that have been passed down through his family, along with poems that capture the spirit of commercial fishermen. Long Island Traditions salutes Doxsee and others like him for their perseverance and dedication. You can visit his web site here.

stood out from Horn Island – on our way
across the Gulf on a straight line tract
two thousand miles from N.Y. U.S.A.
a one way journey – we won’t be back

here comes a big one
bow up UP! SUNNYSIDE!
the good ship knows far better than we
couldn’t pitch pole if she tried