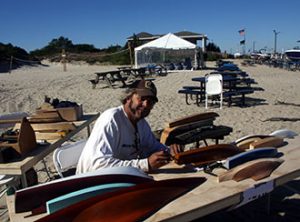 Chris Hale has worked at many boat yards on Long Island, including Coecles Harbor Marina on Shelter Island, at Hampton Shipyard in East Quogue, and currently at Weeks Boatyard in Patchogue where he has worked since the 1990s. He works on traditional wooden boats ranging from skiffs and cat boats to modern recreational fishing boats. Hale is one of the few boat builders who also make “half models” of traditional boats that once graced Great South Bay.

Featured in a Newsday article, Hale told reporter Bill Bleyer: “My great-grandfather was a boat builder in Brooklyn in the late 1800s and early 1900s” and built half models as part of that business. He inherited three of his ancestor’s workboat half models, which are now mounted on the wall of his living room. “I always thought they were kind of cool,” Hale added.

Hale uses various types of wood depending on the model he is making. Using specialized tools, Hale makes garveys, models of sailing racing boats, and other boats commonly found on Great South Bay. He estimates that he has built over 100 models, and plans to continue for years to come.

Chris Hale can be reached at http://hales-halves.com.