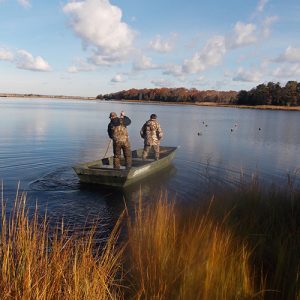 Wetlands restoration. Environmental education. Wildfowl carving. Hear these words, and then think of Ducks Unlimited. This is their mission. Ducks Unlimited was started in 1937, when the dust bowl threatened to decimate the entire wildfowl population of the country. The mid-continent, where most waterfowl are born, is a long way from Long Island, but the survival of ducks and other wildfowl depended on a few Long Islanders – Joseph Knapp, E. Herrick Low and Robert Winthrop. These men realized that in order to preserve the future of wildfowl hunting on Long Island they had to save the habitat of wildfowl in the prairies. They raised $60,000 in 1940 in order to survey wildfowl species throughout the United States and to restore wetlands habitats.

The organization has preserved 8 million acres of wetlands along rivers, coastlines and in the prairies through the extraordinary efforts of its members and volunteers. On Long Island they have launched the Long Island Wetlands Restoration Initiative to preserve approximately 1,200 acres of salt marsh each year for 10 years. Each of the 13 Long Island chapters will raise money in order to accomplish this critical environmental goal. Craig Kessler, the group’s executive director, states that “We have a coastal ecosystem that everyone is concerned about – not just duck hunters and Ducks Unlimited. There are all kinds of environmental groups that are interested in restoring the quality of our remaining wetlands.. We need to work cooperatively.”

Ducks Unlimited first project was to restore a man-made island in Great South Bay that had been created from dredge spoil left over from years of navigational dredging. Grass Island had become ecologically useless to migrating wildfowl, even though it was located in the Atlantic flyway. With a profile over 20-feet high, it had been overtaken by phragmites and other invading plant species. With approximately two weeks of heavy equipment work the group was able to create eight freshwater ponds and plant upland nesting grasses in-between. Dedicated as the “Al McCormack project,” the island attracts local ducks and other migratory birds. Other organizations also cooperated in the project – the Southshore Waterfowlers Association, the Town of Babylon and the NY State Department of Environmental Conservation.

Other projects have included creating wood duck boxes that resemble the birds preferred winter habitat. They can be seen in the upper reaches of the Carman, Connetequot and Peconic Rivers, and will eventually be found in other freshwater stream corridors. Newer programs include a young waterfowl hunter program where students, ages 12 – 15 learn traditional duck hunting skills, waterfowl ecology and wetlands biology. Others learn to carve decoys, or how to “call” ducks, traditions that are part of the maritime culture of Long Island.

All these programs are due to a hard corps of volunteers, and the work of Craig Kessler, Ducks Unlimited regional director for Southeast New York. A resident of Stony Brook and native Long Islander, Kessler and a group of dedicated chapter leaders work to raise money to restore wetland habitat, while fostering the longstanding waterfowling traditions. Ducks Unlimited is recognized nationally by other environmental and conservation organizations, and today represents one of the largest and most successful conservation movements in North America. To learn more about Ducks Unlimited in New York click here.