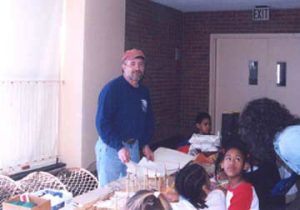 Bill Hamilton was born in Sayville and lives in Patchogue. He learned to fish, clam, and to catch oysters from local fishermen and baymen like Samuel Ockers; he also catches fluke, flounder, and eels using pound traps and fyke nets. Besides being a fisherman Bill is also a boat builder who makes garveys and sharpies, and he served as vice-president of the Brookhaven Baymen’s Association. This non-profit organization was founded in 1978 in order to protect water quality, fight price-fixing, conserve the bay’s resources, and preserve the Long Island fishermen’s way of life. The group consults with local governments on conservation projects and legislation that affects fishermen.

As Bill puts it: “Basically, I’ve always been involved going to meetings about fishing, clamming, and crabbing. I always want to be there and hear what they’re trying to force down our throats. Usually at the fishing advisory meeting, shellfish advisory meetings, or any of the special meetings the DEC calls, I try to make it there. You have to be there, because the next thing you know you’ve got a new order you didn’t want.”