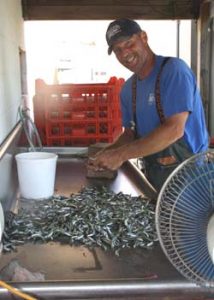 Tom Jefferies was born in Freeport, following a long line of fishermen in both the Jefferies and the Remsen families. Tom learned to fish from older fishermen on the Nautical Mile, including Frank Cona and others. His family owns a bay house, where he learned to harvest clams, crabs, mussels and other species in the nearby bay waters. Tom learned to catch killies with his grandfather, a tradition he continues. He worked on trawler boats and in the bay, so that he can support himself as a full time fisherman. In recalling his first memories, Tom talks about the bay house.

“We only opened from Memorial Day to Labor Day. Grandpa and my uncle John Remsen targeted killies. They sold them to Captree State Park and the Jones Beach Fishing Station. They were their big accounts. Proximity was a big thing because we were relatively close to them. We would deliver by boat. My family—we all worked on the bay—part time or fulltime. In the 60s, up until the mid 70s, killies were king. There was money to be made. Fishing was good.” Tom purchased his first boat when he was 12 from local Freeport boat builder Al Grover. Today he uses garveys built by his late uncle John Remsen.

As he got older he worked on trawler boats including Frank Cona’s The Sturgeon. Tom remembers, “In the winter we would fish for whiting, squid, week fish, striped bass in the spring and in summer for fluke. Fluke always brought a good price.”

Like other baymen, Tom harvests a variety of species in order to work year round. When he first started working on the bay he harvested eels, using pots built by his cousin Fred Verity. Today he harvests clams, spearing which are used for bait, mussels, striped bass and bait crabs. Tom makes his own nets. Tom also harvests horseshoe crabs both for bait and to sell to other fishermen and medical companies. New York is one of the few states that allows commercial harvesting of horseshoe crabs.

Tom and other baymen are very conservation oriented, both for environmental reasons and also so that they can continue to work on the water. When asked how he has survived as a commercial fisherman, Tom reflects that,

“That’s the way fishing is anywhere in the world I would think. It’s never the same thing season to season which makes it interesting. It will test your endurance and ingenuity. When you go into something a little new—you have to experiment a little with different baits, traps, nets. As time goes on, we’re very regulated in the United States and in New York State—which is good to certain extent but what we’ve learned to do is try and target certain species and stay on them as opposed to a lot of by-catch and destroying things that we really don’t need.”