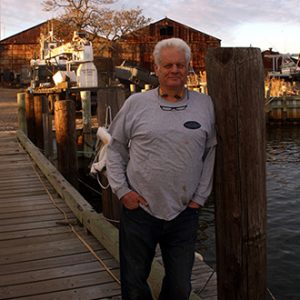 Anders Langendal was born in Sweden, arriving in Greenport in 1967, shortly after completing his boat building apprenticeship. “When I came here about 50 people were working here, 7 good carpenters, machinists, painters and roustabouts. In those days there were three classes of workers, and you would start as 3rd or 2nd class. Within 3 months I got 1st class pay.” By the mid 1960s, the Greenport boat yard where he worked was in decline. “The last boat built here was a 54-foot yawl—launched in 1966.” Anders brought traditional skills with him such as “tight planking,” and steaming wood in a steam box that is used today. He has built several skiffs and sailboats for both recreational and commercial fishermen, the most recent one completed in c. 2008.

Like other builders, Langendal restores historic wooden boats, enabling him to preserve skills he learned in Sweden. “I’ve worked on different types of fishermen boats, all wooden. It doesn’t make a difference if it’s a pleasure boat or commercial boat. They are basically the same except commercial boat has to be inspected by the Coast Guard. Other than that, a boat is a boat. In the last 10–15 years or so —there’s been a lot of restoration or rebuilding of wooden boats.” Newer technologies have helped builders because they are often lighter and easier to use. However some tools are many years old. “My favorite old tool is Stanley block plane.” Surprisingly, the process for restoration has changed little. “When I started out in the 50s, we had to hand sand our boats. Boats were like a mirror. They had a beautiful finish.” Today, Anders’ sons Christian and Eric work alongside him and have built boats of their own. They expect to keep working for years to come. “We have lots of projects. I don’t think I’ve been out of work a day in my life.”