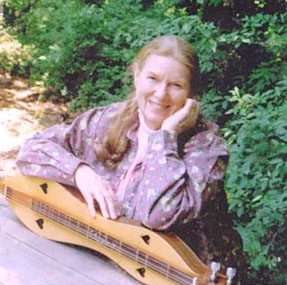 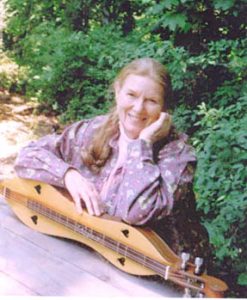 When many hear the word “folksinger,” they generally think of revivalists like Pete Seeger, Tom Paxton and other professional performers who have collected and written songs based on the experiences of working class citizens. Here on Long Island we were fortunate to have Jean Ritchie who learned to sing ballads from her family and to write songs about her native Kentucky community. Born in Viper, Kentucky in the Cumberland Mountains just before the depression Jean worked on the family farm as a child, attending school at her father Balis Ritchie’s insistence. With her sisters Jean sang songs their father taught them while they picked corn and other crops. Jean recalled that “there was never a dull moment.”

Traditional ballads, hymns and spirituals like “Shady Grove,” “Fair and Tender Ladies” and “When Sorrows Encompass Me Round” formed Jean’s repertoire, one that Jean and various folklorists traced back to England, Scotland, and Wales. Jean remembered that her cousin Jason Ritchie taught her “if you have a set of words just find a tune and put it together.” Her father later taught her to play the dulcimer, a traditional instrument common in the Appalachian region.

In 1946 Jean received her bachelors degree in Social Work from the University of Kentucky. Shortly thereafter she moved to New York City, planning to return to Viper. While working at the Henry Street Settlement, she met and married photographer George Pickow. At the same time, she also met Alan Lomax who was producing concerts featuring traditional musicians. In no time, she was appearing at Carnegie Hall, local concert halls like the Greenwich Mews Theater and on Oscar Brand’s radio show. Pete Seeger, Woody Guthrie, and Doc Watson were among her admirers.

In 1955 Jean and George moved to Port Washington at the suggestion of Oscar Brand. They remained there until 2009, when George passed away. Jean served on the board of Long Island Traditions during its early years. She returned to her native Kentucky shortly afterwards, where she continued to perform the songs of her region, in addition to composing original songs that reflected her life’s experiences. “Blue Diamond Mines” describes the dangerous working conditions of coal mines, while “Black Waters” explores the environmental decline of her home region due to strip mining. Jean served as a panelist to the National Endowment of the Arts, as an advisor and performer at the Newport Folk Festival, and was granted a Fulbright scholarship to document her repertoire of traditional songs. She was also awarded a National Heritage Award by the National Endowment for the Arts. Jean passed away on June 1, 2015.