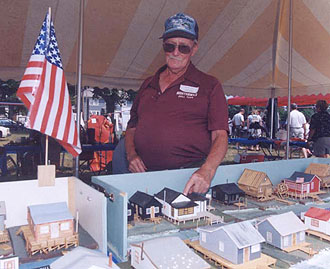 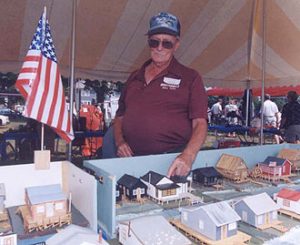 Jeff Blossom was a resident of Freeport, where he lived from the late 1920s. Since he was a teenager, Jeff spent most of his time on the south shore’s bays and beaches, enjoying the company of his friends as they went duck hunting, clamming and fishing. He always spent time at one of his friends’ bay houses.

Bay houses are small shacks that dot the marshlands on Nassau County’s south shore. The bay houses, which date back to the 1800s, were originally built by fishermen for shelter during the winter and summer clamming and hunting seasons. The houses have been passed down through several generations. Jeff owned a bay house that was originally built by Pete Kleiner. Like other bay houses, it was modest in scale, consisting of two small rooms topped by a pitched gable roof. Spectacular scenery surrounded the house.

Jeff began building models of bay houses as a hobby. However, the models have great historic significance today. In 1965 the Town of Hempstead began tearing down scores of bay houses, to return the marshlands to a natural state. Jeff lost his bay house during this time. His models are among the few reminders that bay houses existed prior to 1965. Thirty-one bay houses remain today. In 1994, the Town voted to preserve the bay houses for future generations.

Jeff’s models document the history of hundreds of bay houses. As a former bay house owner, Jeff was very knowledgeable about the bay house’s historical and cultural importance, to recreational and commercial fishermen. You can see them at the Long Island Marine Education Center located at 202 Woodcleft Avenue in Freeport. He built over 100 models that recreate with exacting details the design and structure of this unique cultural resource. Using tools he designed and built from scratch, Jeff’s models reflect his extensive craftsmanship as a woodworker.

Jeff passed away in 2010 after a brief illness. His models are part of the collections at the Long Island Maritime Museum We miss his gentle spirit and expert craftsmanship.