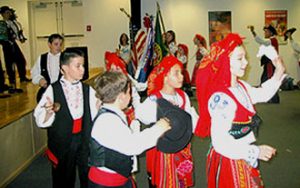 The Portuguese Club of Mineola was founded in the late 1920s. Today the club is not only a place for the community to gather but is also where the younger generation learns about Portuguese culture. Nearly fifty children, ages four to thirteen, participate in Sonhos and twenty-four older dancers perform with Juventude.

Manuel (Manny) Carlos, head teacher or ensaidor, began his dance career at Mineola High School 24 years ago after immigrating to this country from a small town near Braga, Portugal. In 1985, he formed the current group at the Portuguese Center with his brother David Fernandes and close friend Domingos Cunha. Antonio (Tony) Da Silva, a first generation Portuguese American and Mineola native who joined Rancho Juventude in 1989 is the school’s director.

The group has a large repertoire of traditional dances from the northern region of Minho, since most Mineola Portuguese, including Manny, trace their roots to that area. Their beautifully embroidered costumes are also native to Minho and are imported from Portugal at great expense. Dancers are accompanied by an in-house music ensemble fronted by father/son concertina (Portuguese button accordion) team, Aventino and Elvis Da Costa. The Da Costas are backed by a variety of traditional stringed and percussion instruments, as well as the dancers’ castanholas (castanets) and panderetas (tambourines).

Rancho Juventude performs for all kinds of events, from Portuguese holidays to dance competitions to the festivals of other cultural organizations, like those of Mineola’s Irish or Jewish Centers.