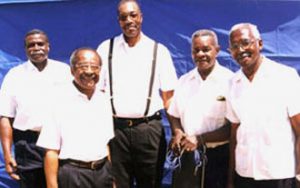 The Gospel Elders were a traditional gospel quartet consisting of six African American gentlemen who emigrated from the south during the 1940s and 1950s, and lived on Long Island and Queens. They sang hymns and spirituals in a variety of musical formats including blues and a capella.

They performed in numerous churches, folk festivals, gospel competitions and at local events. The musicians taught about the cultural legacy of African Americans, and the historical role of gospel music. Their programs included explorations of the musicians’ family histories and how African American culture was reflected in gospel performance. The group disbanded after the passing of its many members. The surviving members formed the Elder Statesmen.