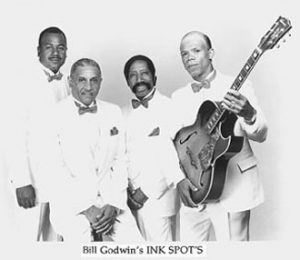 The Ink Spots are an African American quartet that became famous for hit songs like “If I Didn’t Care,” “The Java Jive,” and “I Don’t Want To Set the World on Fire.” The original group was formed in 1932 and sang four-part harmony arrangements of various popular songs. Like other a capella and harmony singing ensembles in the 1950s, the Ink Spots sang a varied repertoire for both listening and dancing. Through the 1930s and 1940s the group had many successful songs, even breaking records with their sales.

Bill Godwin was born in Wilson, North Carolina, and began singing in church and school choirs at the age of four. He comes from a proud and musical family. His father, who played the piano when not bicycling to make business calls on local sharecroppers, earned a college degree and was the first black man to set up a Metropolitan Life Insurance office in that community. “My mother sung in the church choir and at parties accompanied by my father on the piano,” Godwin recalls. The family moved to Harlem, New York, when Godwin was ten years old. It was there that he became involved in street-corner singing groups and took singing lessons at the Jerel Hall School of Music. In 1953, he met Charlie Fuqua who was forming his own group of Ink Spots after the original group disbanded. Bill Godwin sang with the Fuqua group until late 1953 when he was drafted into the U.S. Army. When he was discharged in 1955, the position in the Fuqua group was filled. Bill then got a job in the Taft Hotel, joined the union and soon became a shop delegate. In 1958, he heard that Adriel McDonald, a replacement bass for the Ink Spots, was looking for a lead singer; Bill tried out and got the job. Godwin was then working in the hotel during the week and singing nights and weekends.

In 1963, Godwin moved to East Elmhurst, Queens, often visiting a park in Corona where he chatted with jazz legend Louis Armstrong. In 1973, he was offered and accepted a job with Union Local #144 (Hotel, Hospital, Nursing Homes and Allied Health Services). Also that year, McDonald became ill and recommended Godwin to Berney Mackey, Fuqua’s replacement guitarist. Mackey liked what he heard and Godwin again became lead singer. In 1983, following the deaths of Fuqua, Mackey and McDonald, Bill Godwin formed his own group with members Al Williams, Jr., Kevin Banks, and Donald Watson. He continued his work with Local 144 until retirement in 1992, and he now resides in Jamaica, Queens.

Godwin has taught his fellow musicians how to blend their voices to achieve the Ink Spots’ signature sound. “The sound of the Ink Spots came from the gospel and church singing tradition,” he explains. “As in gospel music, all the songs told a story. If you listen to the lyrics, you will hear the story. The difference is that it was made more commercial, with a more poetical sound.” The group continues to be popular at benefit concerts and music festivals, and in 2000, they released a CD entitled “Bill Godwin’s Ink Spots on Stage.