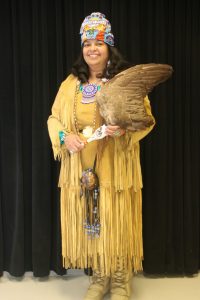 Denise “Weetahmoe” Silva-Dennis (Shinnecock/Hassanamisco-Nipmuc) is a retired Southampton Elementary School art teacher.  She is from the Shinnecock Tribe in Southampton.  Silva-Dennis graduated from Hamilton College with a Bachelor of Arts degree in Studio Art. Upon graduation, she received honors in her discipline.  Silva-Dennis is also an accomplished bead work crafts woman. The traditional Eastern Woodland style of bead work was handed down to her from the elder women of the Shinnecock and Hassanamisco-Nipmuc Nations. Her work includes necklace and earring sets, beaded medicine fans, walking sticks, and beaded cradleboards.  Her beaded necklaces have been shown at the Louise Himelfarb Gallery and at The Studio Connection, both in Southampton, NY.  Several Native American exhibitors carry an assortment of her beaded creations to Powwows throughout the Northeastern United States.

Silva-Dennis is also a recognized painter and has been featured in area exhibitions including shows at the Metropolitan Museum of Art and Smithsonian Institute. She also won the Parrish Art Museum’s Judge’s Award in the painting category.