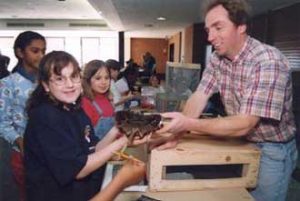 The Remsen family of Freeport goes back to the late 1800s, when Alanson Ellison began fishing on the south shore. A bayman, Alanson taught his grandchildren the skills of building traps, fishing, and maintaining the family bay house at Brandt Point, where he operated a bait station during the 1950s. His grandchildren started working on the bay, and learned to build garveys, a traditional boat used by south shore baymen. Today John Remsen Jr. works on the bay part-time, trapping killies and other indigenous species. He and his father also built garveys for area baymen.