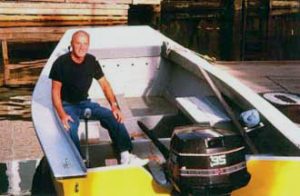 John Remsen of Freeport was one of the few men on Long Island who built garveys, a traditional flat bottom boat used by baymen and recreational fishermen in the shallow south shore waters of Nassau and Suffolk County. During his lifetime he built over 100 garveys. Like the generations before him, John spent his whole life maintaining a traditional way of life.

John was born in Freeport in 1933, the son and grandson of fishermen and baymen. As a young boy he helped his great grandfather Alanson Ellison go haul-seining on the ocean, before it was outlawed in 1942. He also went duck hunting, trapped killeys and crabs, and fished for fluke and flounder. John spent countless hours at the family’s bay house, eventually building his own with his mother Ruth Remsen and Alanson in 1954.

When asked why he started building garveys John replied “It was a need and a want that resulted in building a boat.” Until the 1960s the garveys were made of cedar planks and green oak. In order to build the boats they air-dried the cedar at home. They also planed and sawed the edges of the planks. The oak ribs were bent with steam. It took 1 hour per inch to steam the green oak. They would put a pipe in a fire made from the sawed edges that would expel steam onto the oak that was placed in a steam box. Each oak rib was approximately 1_”x 5″ times the length of the boat, typically 15 – 16-feet long. Only green oak was used because dried oak would crack.

John used 20 – 30 forms and patterns that he made. Fiberglass is used today because it is faster to build the boat. He started using fiberglass in the 1960s. As a result his boats were lighter, and could be put on a trailer. The boat also did not have to be painted.

Like other tradition bearers, John passed his skills and knowledge to his children and grandchildren. John Remsen Jr. works on the bay part-time trapping killeys for local bait shops. John Sr. also owned a dragger boat, the Miss Renee, which was docked behind his house.John was also active in supporting the preservation of maritime culture in Freeport, volunteering for Splash, a local environmental organization. John passed away in 2020.