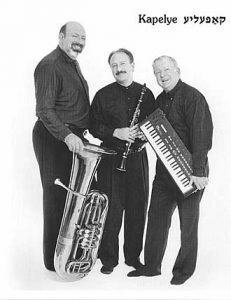 Once asked if he thought of himself as the “Youngest of the Old Guys” or the “Oldest of the Young Guys”? Pete Sokolow, klezmer musician, stride pianist, author, teacher and recording artist hesitated not a second and claimed his allegiance to the Old Guys. Proudly bringing up the rear in a glorious parade that stretches from Old World to New, is the essence of Pete Sokolow. Born in 1940 in Brooklyn, he began piano lessons as a child from his father, a devotee of George Gershwin. Pete later took up clarinet to better emulate the sound of the swing and early jazz he loved. It was his eventual introduction to the Catskills, then in their twilight years, which formed Sokolow’s lifelong love of classic Yiddish music. Soon he became the preferred piano accompanist for klezmer greats like Dave Tarras, Rudy Tepel, Paul Pincus, Howie Leess, Ray Musiker, Sid Beckerman and the Epstein Brothers (who always called him “The 5th Epstein”), men whose regained popularity in the current klezmer “revival” is due to Pete Sokolow.

Today, Pete is an acknowledged icon and master in the field of klezmer music. If you’ve ever seen a documentary film about klezmer music you’ve probably seen him. It wasn’t always like that. When we first met in the mid-1970s Pete had been a sparkplug in the Jewish music world for nearly 20 years, mainly in the field of Hasidic music. Since then, it’s been my thrill to collaborate with him on numerous klezmer projects. In 1982 we formed “Klezmer Plus!” which has been a staple at weddings and bar mitzvahs in the tri-state region and also at numerous national folk festivals. Our 1991 CD was cited by the Library of Congress as one of the best traditional recordings of the year. Pete is also a founding staff member of “KlezKamp: The Yiddish Folk Arts Program” where, since 1985, he has taught piano, orchestration and has led bands. Pete also co-authored two books The Compleat Klezmer in 1982, and The Klezmer Plus Folio in 1985 for Tara Publications. Pete also wrote Guide to Klezmer Arranging and Orchestration and Piano and Keyboard Guide for Klezmer and Hasidic Music.

And finally joining “Kapelye” in 1993, Pete is prominently featured on the band’s CD “Kapelye On the Air” a tribute to old time Yiddish radio. On that subject, Pete is currently scoring and performing the music for a multi-part documentary NPR series on the history of Yiddish radio with producer David Isay and myself set for this Fall on “All Things Considered”. How fortunate I’ve been to have Pete Sokolow as a collaborator, a colleague, a partner and a friend. Without him, the work I and others in the klezmer scene have accomplished would be less textured and a lot less steeped in classic performance practices than it is. Thanks, Pete. Thanks for everything.