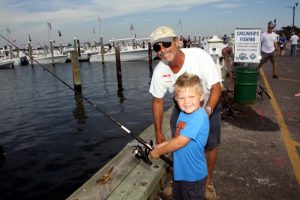 The son of an avid fisherman, Reed got his start fishing with his father at a young age. “He would come home and go on the jetties,” said Reed. “He was a surf fisherman at first, and then he started getting boats. Mostly he would take me on the boat and we would go out together.”

Reed grew up on the west end of Long Beach and moved to east Atlantic Beach when he was 10. Before he had a boat, he would fish from the jetties or on the beach. 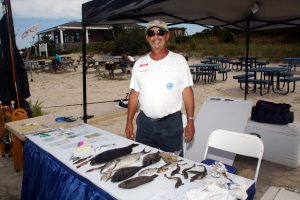 He described catching codfish with his dad when he was young: “In the early 60’s, he’d drag me out in the middle of wintertime to go cod fishing,” recalls Reed. “At that time, you could catch codfish by going into open bottom, dump out some chum, and wait for the rods to bend. That was fun, except when the water was rough.” His father, he recalled, would go out in any weather.

A life-long fisherman, Reed is a director of the New York Sportfishing Federation, and a former president of the Atlantis Anglers Club, a recreational fishing group. Reed participates in our Maritime Arts in Education program and our fishing demonstrations at the Tobay Boat Show. Click below to watch a video of Reed discussing recreational fishing.