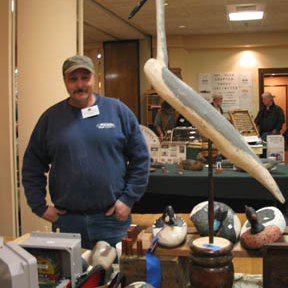 George Rigby was born in Bay Shore, Long Island, the descendant of several generations of baymen and duck hunters. His great grandfather and grandfather worked on the bay during the late 1800s and early 1900s in Canarsie near Sheepshead Bay in Brooklyn either harvesting shellfish or hunting ducks for the commercial market. His father moved to Bay Shore and became a commercial fisher, teaching his son how to harvest clams, eels and other species. George Rigby, Sr. also taught his son how to go duck hunting.

Like other baymen George learned by helping his father. He raked and tonged for clams, dug for soft shell clams, and went eel spearing. They also caught weakfish and bluefish using nets and traps.

When George was ready to graduate from high school, his father asked him what he wanted to do, he immediately said, “I want to work on the bay, just like you.” His father told him he would need a boat, and so George began working at the Wildfowler decoy plant in Babylon until he had enough money to buy a boat. After a year he began working on the bay, first clamming and eventually moving into eeling, catching fluke and flounder and other species. In the winter. George also harvested crabs and scallops. He typically caught 4–5 bushels of clams daily, although sometimes he caught as many as 13–14 bushels in a day. George and other baymen believe that the scallops declined because of changes in the water quality of Great South Bay.

During this time, there were hundreds of baymen in various communities along the South Shore, most of who were clammers. However there were several “old timers” who harvested eels and finfish. George’s father also harvested bait shrimp and killies for the bait station at Sexton Island near Captree State Park.

George has a variety of tools to work on the bay including handmade tongs, clam rakes, and scallop dredges, items that were commonplace in baymen’s homes. Other baymen also built boats for themselves and other baymen. They included Sam Jorgensen in West Sayville and Ben Bishop in Patchogue. Today George has five boats including garveys and skiffs that are used for a variety of harvesting activities. He uses gil and haul seine nets to catch bait fish. Like most baymen, George uses horseshoe crabs as bait, which he keeps in a pen in the bay. At the end of the season the unused crabs are returned to the bay.

Like many baymen, George remembers when you could walk from one end of the bay to the other by jumping from one boat to another. Today there are about six baymen in Center Moriches, three in Patchogue, perhaps six in Setauket and Stony Brook, instead of the hundreds that once plied the waters during George’s youth. He attributes the decline to pollution, runoff, and the closing of inlets on Fire Island. At the same time, George would like to see more opportunities for area baymen to secure currently restricted fishing licenses that are held by out of state boats.

Like many baymen George’s ancestors also made a portion of their livelihood from commercial hunting and as hunting guides. His father worked at Wildfowler Decoys, based on Long Island, and was one of the first members of the Long Island Decoy Collectors Association. He is also active in the South Shore Waterfowlers Association. George’s grandfather was an active sportsmen who also worked as a hunting guide. He often took his grandson hunting, a tradition that started when George was eight years old. His grandfather was also a duck boat builder.

George’s father was an active hunting guide, taking small groups of sportsmen for a day of hunting. These days typically began at 4:30 a.m. and lasted until the early evening. Most of his customers were local residents. George’s father preferred hunting to clamming. Like many hunters, George’s father made his own decoys, using them every season.

George began hunting at an early age, along with decoy carving. He remembers going at 2 or 3 o’clock in the morning with his uncle, carrying a double barrel shotgun down to the beach where houses stand today. When he was in school he would ride his bike down at 4 a.m. and would go to the Connetquot river on the east side of Roberts Creek every weekend. “We used to go down in my duck boat—and shoot broad bill in Bellport Bay and Smiths’ point.” His hunting friends included Bill Joeckel who is also a well known duck hunter and decoy carver. Another friend, bayman John Buczak once said on the radio that “whoever is shooting sure knows what they’re doing.” According to George, “a perfect day for hunting — a sunny day is no good — ducks only move in cold nasty weather. The colder the weather, the better it is for ducks. Ice is good.” George also likes just being there. “It’s just fun being out there.”

Like other hunters, George also carves his own decoys. He has one over 100 ribbons for competitions from Long Island to California. His award winners include a canvas back. George explains that “I used a hatchet to carve it out with, a chisel, and a drill press to hollow it out. I painted it with gesso and combed it with a baby comb through wet paint. It was time consuming and I still have that duck, it’s one of my prized possessions.”

For working decoys: “I have some that I made years ago that I still use. I use a lot of cork which I bought from a friend of mine. My good ones I make out of that. You can buy the cork which is the best to use. The wooden ones are a little tougher. The cork — I use a keel and keep the head separate. You have to rig them differently because the tide is against the wind.”

While some traditional carvers make show decoys, George prefers making working decoys used in hunting. “I kind of stick to my old ways If you’re going to use a machine why bother? I still use a paintbrush and an oil or latex paint. Some guys use airbrushes. I used to work at Wildfowler decoys painting the birds. But I haven’t made any show decoys in a long time because the competition is crazy.” George worked at Wildfowler when he graduated from high school, so he could save some money and buy a boat to work on the bay.

Like other traditional baymen and carvers, George now has to work part-time on land as a contractor, but he prefers to make his living off the water. He worries about the regulations and whether he will be able to continue this way of life. To help educate others, George participates in Long Island Traditions arts programs in schools and area museums.