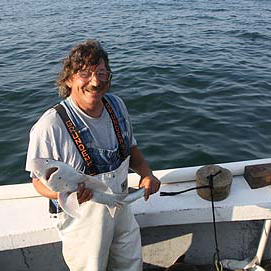 Joey Scavone was born in Freeport and began fishing with his father, a devoted recreational fisherman. Like most recreational fishermen, his father awoke young Joey in the early morning hours to go fishing for striped bass and blue fish, which were abundant in the south shore bays near Jones Beach and Captree. “We’d eat fish for weeks. Flounders, fluke, striped bass, black fish, blue fish. We would give them away to neighbors. It was all good.” Among his chores were pumping out the family’s boat, which was made of wood, maintaining it year round. “I just wanted to stay on the boat all the time. That’s all I did. After school I’d be on the back of the boats snapper fishing. And on the weekends, we’d go out on them fishing.”

As Joey got older, he began harvesting and selling his catch to local residents and markets. “As you get a little older, when you see that you could get money for crabs, fish, clams, that made you more ambitious. It was a lot more money than a paper route. I guess that’s kind of what starts it. You go fishing for fun for a bunch of years, then all of a sudden you learn that you can make money doing it. That’s how all commercial fishermen get started. You start seeing money. What am I going to catch tomorrow? The night isn’t fast enough. You can’t wait to get up in the morning.”

Today Joey works on both the bay and the ocean. He owns a gill net boat which he uses to catch bunker, black fish, blue fish, and week fish. “At the beginning of April we start to catch blues, weeks, black fish—a little bit of everything. By that time (June) it’s mainly blues and bunkers. The black fish last only a couple of weeks. Even the week fish move on. The third week in May is usually good for striped bass, blues, bunker, herring, even a few butter fish.” Unlike in years past, Joey also catches dog fish which is commanding a decent price at the market. However cod fish, which he caught using traditional lines baited with clams, is no longer caught in the area due to restrictions and changing fish migration patterns. Yet Joey has important memories of fishing for cod:

“I remember days when coming back when the wind started blowing out of the northwest, and the water would spray up on the boat and turn into ice. This one day we had to come in early. Because the ice was 4 inches thick we couldn’t see our boat. That day was so so cold. As the cod fish as big as 40 pounders, would come out of the water and by the time they came over the gunwale of the boat, before they hit the deck, they were frozen. They would freeze in a curve. We would put them inside the cabin—laid out this big blue tarp. Had heater in the cabin and we never put fish in the cabin. We came with about 500 – 700 pounds of cod that day. Now I mainly go clamming in the wintertime. That’s about it. I might do a little cod fishing this winter. But my boat is a wide open boat with no heat and if I figure out a way to put heat on it, then I think I would.”

Joey has a wide variety of customers including restaurants, fish markets, distributors and wholesalers. He works with Fulton Fish Market. Like other fishermen, regulations have had a large impact on his livelihood. “Yea they made it pretty tough and costly. Everything adds to that price of fuel and all these licenses cost money. It’s money you have to come up with. And you have to do it (buy the licenses) in the month of January when it’s the toughest month of the whole year for us.”

Joey also harvests crabs, using bunker that he has caught for bait. However his main activities are fishing and clamming. When asked how the future looks, Joey states, “I see it looking ok. I’m a pretty simple guy. I don’t need much. I don’t go out and spend money. I just basically try and make every day count, whether it’s fishing, clamming or crabbing. As long as the price of fuel doesn’t put us all out of business, I’ll be here tomorrow.”