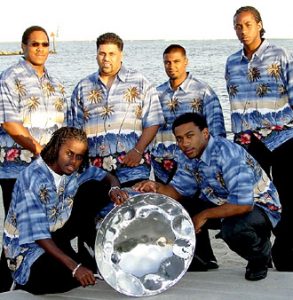 Steel Sensation was founded by Trinidadian born Ian Japsi. Ian learned to play from family members, including his uncle, the legendary Jit Samaroo. Trinidad is a small Caribbean island that has had a big effect on music through its contributions of calypso and the steel band. The steel band is composed of a variety of steel drums or pans with different tunings. The instrument holds the distinction of being the only acoustic instrument invented in the 20th century. Trinidadian steel bands began in the late 1930s, when musicians turned garbage cans and oil barrels into drums or pans. Over time the distinctive sound and rhythm grew popular during pre-Lent Carnivals, similar to those of Mardi Gras.

Steel Sensation members range in age from 18 to 45 years old. They play both traditional and popular tunes and have appeared on both on television and radio. Their repertoire includes calypsos, jazz melodies, classical music, and show tunes. Ian Japsi states:

“In the past people listened and played the music by ear. In today’s musical arrangements musicians still play from memory but also use additional methods including learning and following songs by using score sheets and arrangements.”

Prior to 1989, members of Steel Sensation played in other groups at the annual West Indian Carnival Day Parade on Labor Day weekend in Brooklyn. This is a major cultural event that dates back to the 1970s. Currently, Steel Sensation plays on family occasions and religious holidays. They also perform at restaurants, including the famous Tavern on the Green in New York City, and at museums and schools.