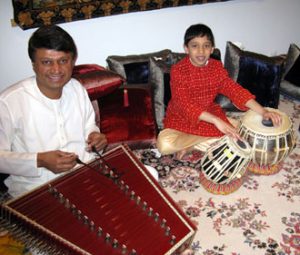 Achyut Tope was born in Hyderabad, India in the early 1960s. He received his Bachelor’s degree in civil engineering in India, and at the age of 21, he immigrated to the United States to continue his studies. He attended SUNY-ESF and Syracuse University where he received his Master’s degree. He continued his studies for his Ph.D. at the University of Virginia in Charlottesville, Virginia.

Achyut plays traditional Indian music. His preferred instrument is the Tabla, a percussion instrument comprised of a pair of small hand drums. He learned informally by watching a friend who was formally studying the Tablas and who would let him occasionally play them. “I like to pick up things on my own. It’s very rewarding to hear a song and try to do that.…So I like the music to flow and be natural, not to have any restrictions.” He also experimented with them at an afterschool program for children at a local radio station in Hyderabad, India. He learned Tabla formally from Pt. Samir Chatterjee between 2002 and 2005.

As Achyut recalls, “We didn’t have Tablas at home. I’d find myself playing on the table, play on the cupboards, dining table, any place where I could produce a sound. We used to have this drum where we used to store water—a steel drum. Depending on the level of water in that drum, it would produce different sounds. My little brother and I would have a party playing on the steel drum.”

Achyut plays many instruments including the Harmonium, Santoor/Santur, Congas, Dholak, Dholki, Pakhawaj, Sitar, Banjo/Bulbul Tarang, Hawaiian guitar (slide guitar), and piano. He is an intuitive learner and has a natural inclination for many percussion instruments.

Growing up in the Andhra Pradesh region of India, he lived in a very diverse community where music, dance, art, drama, and language were highly valued and integral to their cultural education. His family originally came from an Indian state called Maharashtra – whose language was Marathi. They later moved to the Andhra Pradesh State, whose language is Telugu. Achyut speaks five languages fluently and understand most of the Indian languages.

Achyut and his wife feel that it is very important to pass down their language and art to their children, who are growing up in the United States, so that they may always remember and honor their “Indianness”, and will have a rich tradition/culture to pass on to their children through languages and music. His parents were both teachers, and his father was also musically inclined. He believes it is important to create music:

“I like the expression aspect of music. I think at very high level – my belief is – good music breaks all the barriers, structures, and everything else. Good music will appeal to everybody, and it resonates with everybody. There are certain phrases one can learn in two or three applications. For it to sound good, one has to play it 100 times. For it to glow, one may have to play it a thousand times with feeling, and with an intention to sound better the next time. Feeling in music.…we call it Rusa–Rusa is essence (mood).…one must be able to create that mood.…That is the profound impact. A good musician will be able to create and invoke that feeling in the listener; that is the core of the composition.”

Achyut originally came to Long Island in 1990 to work at Brookhaven National Laboratory. He was responsible for organizing Indian music classes and workshops for fellow employees and the local community which were taught by Pt. Samir Chatterjee and Smt. Sanghamitra Chatterjee. He currently lives in Miller Place and has lived there for over 18 years. He is married with two children. His two children, born on Long Island, Tejas and Priyanka, are also trained in traditional Indian music. Priyanka formally studies and performs Hindustani (North Indian) classical music, and a South Indian dance called Bharatnatyam. His son Tejas is a tabla player as well, who is learning from Pt. Samir Chatterjeee, and frequently performs with his father. All the members of the Tope family are well known and recognized in the local Indian community and frequently perform at area concerts and festivals.

LI Traditions · Achyut Tope on how he learned to play tabala