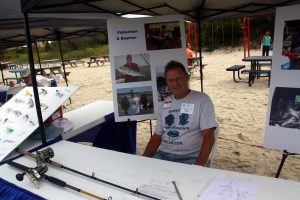 Ed Thomas was born in Baldwin, NY, and has been fishing for as long as he can remember. His started his first business at eight years old, digging soft shell clams and putting them in a basket on his bicycle, and selling them house to house down the street. He developed a route and was earning twice the market price for soft clams. Even at the age of eight, he loved being outside and being his own boss.

Ed graduated from SUNY Buffalo in 1973 with a degree in environmental design. After college, he returned to clamming in the bay and working in a fish market.

He has fished his whole life. As a rod and reel commercial fisherman, he mostly fishes for blackfish, seabass, fluke, and striped bass. “It is a tough lifestyle, very rigorous and demanding,” he says. “The boat is constantly moving. Your hips and knees are dealing with that plus you are pulling in a heavy fish.” Despite a shoulder and knee replacement, Ed still actively commercial fishes in warmer months. He harvests wild clams, and catches horseshoe crabs. Ed was a founder of the Hempstead Shellfishermen’s Association. He participates in our Maritime Arts in Education programs.