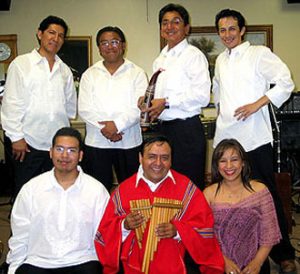 Theo Torres was born in 1952 in Lima, the capital of Peru. His family originally lived in Cajamarca in northern Peru, but they moved to Lima in search of greater economic opportunities. One of nine children, Theo attended school and college. By the age of 15, he was also playing a variety of percussion instruments, as well as writing songs for local groups. He learned to play both traditional indigenous music and popular Latino songs by listening to the radio and from friends and neighbors.

In 1984, Theo Torres emigrated to Wyandanch, New York, from Lima, following a friend’s brother who had left Peru a few months earlier. In Wyandanch, Theo worked picking tomatoes and cleaning lamps in a local factory. There were few Peruvians in Long Island at the time, but Theo’s music helped to keep him going. He composed songs based on his loneliness and the difficulties he faced.

Like other traditional musicians, Theo plays a wide variety of music styles common in Central and South America in order to satisfy diverse audiences. Torres plays salsa, techno cumbia, Peruvian música criolla, Mexican rancheras and Dominican bachatas together with Vientos del Sur (Winds of the South), a group he founded in 2000. Theo became an American citizen in 2000 and now resides in Brentwood. In 2005, Theo was awarded an apprenticeship grant by the New York State Council on the Arts as a master composer and musician. He was also a master teacher in Long Island Traditions’ arts-in-education programs.

In 2021 Theo moved to Atlanta, Georgia where he continues to play and perform.