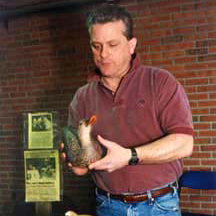 Tommy was inspired working with wood as a young boy from his grandfather, Dave, and his father, Russell. Together they made silhouettes, whirligigs, and bird houses. As a young boy, Tommy spent many summers studying birds and fishing at his grandfather’s home on the water in southern New Jersey. Making their own fishing poles and crab nets still put a smile on Tommy’s face, perhaps preparing him for more challenging projects later in life.

Tommy became a contemporary bird carver and painter. His main area of interest and love is capturing life-like qualities in his work, design, and composition. Spending as much time as he can walking along the Great South Bay and the Massapequa Preserve allows him to gain creativity from the study and observation of diverse wildlife on a regular basis. To this day, you can find Tommy sitting along the mosquito ditches on Fire Island watching and studying shorebirds. Tommy asserts, “There is a romance about being out and being alone with nature.”

Tommy also competes and judges at the most prestigious wildfowl art shows throughout the country. In 2006, Tommy won the Wetlands Institute’s North American Shorebird Championship in New Jersey where his Yellowlegs Shorebird will be on permanent display. In addition to competing and judging, he also conducts seminars nationwide, most notably the Sitka Center for Art and Ecology located in Northern Oregon.