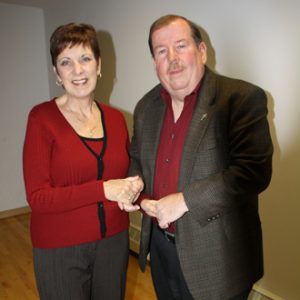 Kevin Westley’s phone rang. It was Sister Peggy McHugh. It seems the dance instructor at the Bishop Ford adult education Céilí class could not finish the semester. She wanted to know if he would “fill in.” That was 25 years ago and Kevin has been teaching Irish dance ever since.

Kevin’s closest tie to Ireland is his maternal grandmother. She was born in Tempo, County Fermanagh. She was sent to America at an early age to live with an aunt. There was no Irish music nor dance influence while Kevin was young. He first started getting interested in his Irish heritage through the Clancy Brothers and Tommy Makem. It wasn’t long before he was smitten. Kevin remembers sneaking into the Village Gate twice during the Easter recess in his senior year to see them.

His first experience with Céilí dancing was at a dance run by Paul Keating T.M.R.F., who would later become one of his closest friends. Kevin remembers being very embarrassed because he couldn’t dance a step. He got his first lesson from Shelia Butler. At the time Kevin was an alumni advisor for the St. Francis College Irish Club. He went to the Irish Arts Center for several years of instruction. He has also studied dance in Ireland several times. Other teachers included Shelia Butler (his first instructor), Alice McInnerny, Ellen Pike, Josephine McNamara, Connie Ryan and Joe and Siobhan O’Donovan. He went on to be the Céilí director at the Irish Arts Center for several years. While there, he was instrumental in developing a balanced Céilí program for beginner and advanced dancers, monthly Céilídhs and the dance area of the Snug Harbor Irish Festival.

Kevin received his Céilí Dance Teacher’s Certificate (T.M.R.F.) from An Coimisiun le Rinci Gaelacha in 1987. He is the only certified teacher in New York City. Kevin formed the Westley School of Irish Dance based in Bayside (Queens), NY. He has taught in Queens, Nassau, Brooklyn, Manhattan, Staten Island, upstate New York, Massachusetts, and several locations in New Jersey. For many years, in addition to his own classes, Kevin would teach numerous adult dance workshops per year. This included 10 years of McGovern’s Emerald Weekends and 5 years of Irish weekends for Kathleen Alcott. He has also taught Céilí dancing on an Irish cruise. Therefore, his students number in the thousands. His students have won numerous awards including first place at United Irish Counties’ Dunwoody Feis in 1985 and second place at the Nassau County Feis. He also has danced at Carnegie Recital Hall.

Kevin has written a dance instruction book. He started compiling dances, in 1987, as a hand out to his students. The purpose of these “Cheat Sheets” was to encourage them to practice during the week and to refresh their memories when they went to a Céilí. Soon, one of his students started putting the “Cheat Sheets” in a binder and in plastic covers. She brought them on a trip to Ireland. At a Céilí, a local dance instructor wanted to know where he could purchase them. So Kevin decided to compile and publish the booklet. The booklet has almost 100 pages of instructions that are easy to read, understand and follow. It is probably the only instructional guide to combine Céilí, Irish Country Set and Irish Two Hand Dancing. It has become so popular that it is now published in its third edition.

Over the years Kevin has been active in several Irish organizations. He has received several awards from Comhaltas Ceoltóirí Éireann (CCE) and other Irish organizations. He was the dance consultant for Paddy Noonan’s recording of A New Irish Dance Party. Kevin’s unique arrangement of the “Stack of Barley” is on this recording. He has done singing recitals and is often asked to sing the Irish and American Anthems at sporting and social events. He has sung on the ice at Nassau Coliseum and for Ireland’s National Boxing Team. He currently teaches at several workshops per year for various organizations including the Nasty Daughters of St. Bridget, a division of the Ancient Order of Hibernians and the Girl Scouts. He was recently featured teaching Irish dancing on the Style Network’s Who’s Wedding Is It Anyway. He has also performed in the New York City area since 1992 as the Irish DJ.

Over the years when asked how long he intended to teach Irish dance; the response was always the same. “As long as I enjoy myself I will continue to teach.” Kevin has been teaching for over 25 years. When asked if he has a favorite memory, he is hard pressed to pick just one because there are so many. However, one does jump out at him. At the end of each semester, Kevin would invite all of his students to a school Céilí. He would encourage them to invite family and friends. Near the end of one party the father of three of his students thanked him for “…the best present he ever received.” With a tear in his eye he said: “Now I can dance with my daughters.”

In September 2011 Kevin won First Place for Adult Male singing at the Nassau County Feis, sponsored by the Nassau County Ancient Order of Hibernians, which has sponsored the Feis since 1972. Kevin has also been recognized by other societies and organizations.