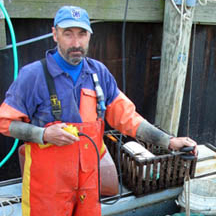 Born in New York City, and raised in suburban New Jersey, Pete spent his childhood summers in Southold, where he first learned to swim, sail, fish, and clam. By the time he was a young man, he knew that he wanted to make his living off the water. As he recalled, “I just wanted to be near the water.” When he turned 20, Pete was working as a commercial fisherman, harvesting scallops which he sold to Mike Morris at the Southold Fishing Station. “That was my first love,” Pete remembers today. In the 1970s and 80s, scallops were plentiful, and most baymen did well, often catching the legal limit in a matter of hours during the season’s traditional opening the third Monday of September. Pete also set gil nets, catching bluefish and other finfish species. Yet Pete and other baymen knew that it was dangerous to depend on one species for their living. So when an elderly bayman, Wes Bednosky, asked Pete to participate in his welk business with the stipulation that he receive 25% of the gross harvest as payment, Pete jumped at the opportunity, a decision he has never regretted. As a result, when the brown tide struck in 1985, Pete was able to survive as a bayman, a decision that has helped him to this day. He makes his own pots, originally made from oak and wood, and today from plastic and composite lumber.

Like other baymen, Pete is concerned about the future. “In a lot of ways we feel like dinosaurs—we don’t feel like we fit in the way the economic system works today—things like health insurance, vacation days, sick days etc.—we don’t get any of that. There’s nothing to fall back on. People don’t understand what it costs to be independent. Regulations are killing us.” When asked why he is not interested in aquaculture, Pete responds, “I’m not a farmer, I’m a fisherman. I don’t want to look at the same scenery all the time. It doesn’t hold the same excitement as stalking and catching the wily conchs. Just when you think you have it figured out—the weather patterns change, or the conch pot in a unexpected area—it still surprises you. It amazes me that we still have a fishery, after all, the conch fishery is the only unregulated fishery I can think of in New York State: What does that tell you? There’s always some twist that makes it interesting.” Alongside other commercial fishermen, Pete is an active participant in local and state management plans, which often ignore their impact on maritime traditions, especially commercial fishermen. A past president of the Southold Baymen’s Association and baymen’s representative to local, state and federal agencies, Pete is committed to preserving this way of life. “I’ve always loved working on the water and I’d hate to leave it. I have no intention of giving it up. I’ve always said that I will be the last bayman standing, and they will have to drag me away kicking and screaming.“