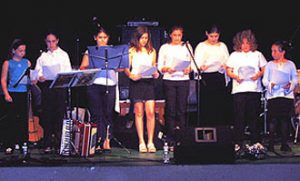 The Workmen’s Circle is a national Jewish cultural organization that was established in 1892 by a group of cloak makers who gathered in a tenement on New York’s Lower East Side. The mutual aid society was formally chartered in 1900 as The Workmen’s Circle/Arbeter Ring. As new immigrants, the founders sought to create an organization that would “unite by a ring of friendship every worker in the land.” Their priorities included unionization and political action, as well as education that would help preserve Eastern European Jewish culture. The Workmen’s Circle offered classes in Yiddish, organized a Jewish chorus, staged plays and concerts, and hosted discussions on the issues facing Jewish immigrants. Over time the Workmen’s Circle established schools and cultural centers, eventually spreading their mission across the United States. Members have been in the forefront of progressive causes including the 1960’s Civil Rights movement, labor rights, the right to quality health care and housing, as well as political causes respecting the rights of minorities and disenfranchised citizens of all backgrounds. The Workmen’s Circle is a secular organization that includes members of all religious backgrounds.

As Jewish immigrants and their American-born children moved to the suburbs, many felt isolated from the close ties they felt in New York City. To maintain their culture, a small group of local residents formed a Long Island branch in 1955 as a Yiddish-speaking fraternal and mutual aid society. Their founders included Milt and Roz Pincus, Evelyne Siegal, Sol Meister and others. Many have remained active and extremely dedicated, continuing to lead programs for this multi-faceted organization. The chapter recently celebrated its 50th anniversary.

Among the group’s first actions was the creation of the I.L. Peretz Jewish School of Nassau, which today offers classes in Yiddish, music, history and other topics. “These were people who grew up in the Workmen’s Circle in New York City and wanted the same experience for their children,” explained Barbara Baron, the Long Island director of Workmen’s Circle. Students range in age from six to adult age. Teacher Deborah Strauss explains that “Our biggest goal is to have a warm, inclusive, accommodating place for kids to come and to feel welcome with their families. Whatever the background and family constellation, we try to instill pride in their Eastern European Jewish identity.”

Another important component of the school is to educate students about the Jewish lifecycle and holiday traditions such as Bar and Bat-Mitvahs, Rosh Hashanah, Yom Kippur, Chanukah, Purim and Passover. Each year they host a community Passover seder to which the general public is invited. Through these experiences, “we hope the children will be knowledgeable and feel comfortable in the larger Jewish world.” The school has a student-published newspaper, The Gimel Gazette, and a klezmer band.

Unlike religious-based institutions, the school is a place where members can explore their views of society today. As one member described it, “We were disillusioned with traditional Jewish education and found a very progressive atmosphere here that we enjoy.”

There are over 1000 members who come from a wide variety of backgrounds. Adults come to study the Yiddish language while children and teenagers explore the meaning of Jewish culture in today’s multi-cultural society. Many interfaith couples and families, who have retained a strong Yiddish background, want to recapture this rich cultural heritage of social justice and political awareness for themselves and their children.

The Workmen’s Circle branch was one of the first groups in the organization to assemble a student chorus that performs both locally and regionally. They have appeared at the New York City model Seder, at the branch’s annual Warsaw Ghetto Uprising Memorial Program, at commemorations of Kristellnacht, and in various festivals including the annual Long Island-based Yiddish Fest sponsored by Workmen’s Circle.

To learn more about the Workmen’s Circle contact them at circle.org/eastmeadow/long-island-east-meadow-leadership-and-staff/