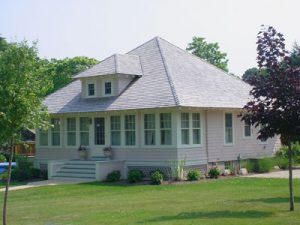 No. of Entrances and Placement: centered full-casement door on east façade and off-centered entries on the rear and south elevations

Architectural Integrity: Post-1941, the one-story full-width porch on east façade was enclosed, the rear porch was enclosed with jalousie windows, and an open rail deck with lattice was added on the south elevation.

Both Brewster Lane and Price Street were renamed sometime after 1933. Brewster Lane was known as Shaw Avenue, generally accredited to the Shaw family who settled in Bellport around 1858. The road was later renamed Brewster Lane for the estate of Charles Jeffery Brewster, which encompassed the tract of land from the “Head of the Neck Line” south to the Great South Bay around 1800. Price Street, formerly Cottage Place, was renamed in honor of Everett N. Price. Price was a butcher by trade, but also served as the first chief of the Bellport Hook and Ladder Company in 1893 and later as Bellport’s first mayor (when Bellport became an incorporated village in 1910).