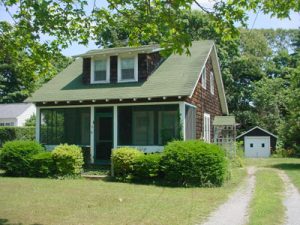 No. of Entrances and Placement: centered door on west façade and off-centered south elevation entry

Historical Information: The building presently at 19 North Howells Point Road and its detached garage remain largely intact since construction, sometime between October, 1933 and December, 1941, according to Sanborn Fire Insurance Maps.

This building is one of many small cottages and bungalows that crop up in a section of Bellport Village, north of South Country Road, on a December, 1941 Sanborn Fire Insurance Map.