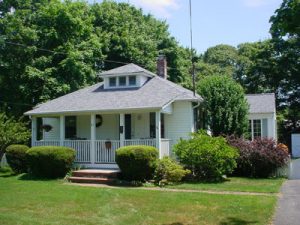 No. of Entrances and Placement: centered entry on west façade and hooded south elevation entry

Description: The building at 21 North Howells Point Road sits on the east side of the road with an east-west asphalt drive, along the building’s south elevation, to a one-story front-gabled garage in the rear (east) lot. The garage is clad with unpainted wood shingles, has double swing garage doors, and an asphalt shingle roof.

Historical Information: The building at 21 North Howells Point Road has been greatly altered from its ca. 1941 appearance. However, the garage in the rear lot retains its integrity and exhibits original wall cladding and doors.

The building is one of many small cottages and bungalows that crop up in a section of Bellport Village, north of South Country Road, on the December, 1941 Sanborn Fire Insurance Map.