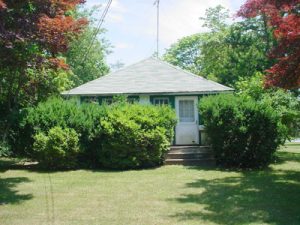 No. of Entrances and Placement: off-centered façade entry with concrete stoop and centered rear entry

Description: The building at 43 North Howells Point Road sits on the east side of the road. In the rear (east) lot, facing Kreamer Street, is a one-story front-gabled garage with a concrete slab foundation. The garage is clad with asbestos shingles, has double swing garage doors with iron strap hinges, and an asphalt shingle roof. Both west and east elevations have a six-light casement window.

Historical Information: The building presently at 43 North Howells Point Road and its detached garage remain largely intact since construction, sometime between October, 1933 and December, 1941, according to Sanborn Fire Insurance Maps.

The building is one of many small cottages and bungalows that crop up in a section of Bellport Village, north of South Country Road, on the December, 1941 Sanborn Fire Insurance Map.

Kreamer Street, which was called Bay View on a December, 1941 Sanborn Fire Insurance Map, is named for several Kreamer men. George Kreamer was Bellport Postmaster in 1880. Captain Henry Kreamer was keeper of the Life Saving Station at Bellport. William Kreamer was a member of the regatta committee of the Bellport Yacht Club, circa 1910, who both owned and sailed racing craft. He was also the owner of the largest and most famous hotel in Bellport, the Wyandotte Hotel. His son, George, carried on the hotel’s operation during the era of Prohibition. The Wyandotte was located on what is today Browns Lane, north of Raynor Lane.