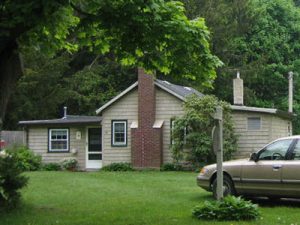 No. of Entrances and Placement: One front doors on the west elevations.

Chimneys and Placement: Two exterior brick chimneys at the east and west façades (Building 1); One interior stovepipe on the west façade (Building 2)

Architectural Integrity: High – Moderate; the original roofing and siding materials of both buildings have been replaced, as have most of the windows.

These two small houses are both one story tall and appear to date from the turn of the century. The house on the left (Building 1) has a gable roof with a shed-roofed lean-to, and a flat roofed section where the front door is located. The house is clad in beige vinyl siding that mimics the look of wood shingle, and has asphalt shingle roofing. A six-over-six double hung replacement window features on the west façade of the flat roofed section. Four-over-four double hung replacement windows feature on either side of the exterior brick chimney on the west façade. An exterior masonry chimney also features at the east façade of the shed-roofed extension.

The house on the right (Building 2) has an eave front gable end roof, which is extended by the enclosed original porch. The house features a small lean-to on its north façade. Small, square, flat-roofed buildings stand to the rear and north of the house; it’s hard to tell if they are physically connected to the house. These buildings appear to have been garages or stables. They feature braced doors and an original eight-paned multilight. The house has a front door on the west façade and three new, tall and narrow casement windows. An interior stovepipe features on the west façade.